Several dozen Hatteras islanders went to a party on Wednesday, April 15, at the new county office building in Frisco.

The lunchtime gathering was a TEA party – as in Taxed Enough Already. It was scheduled for April 15, also known as Tax Day, and was, of course, a symbolic reference to the historic Boston Tea Party.

The Boston Tea Party had a specific focus. American colonists protested taxation without representation by dumping taxed tea from England into the Boston Harbor.

The tea parties that happened all over the country on Wednesday – drawing anywhere from a few dozen to a few thousand people – were apparently an opportunity for partygoers to protest just about everything that is causing them angst these days.

They were billed by organizers as a grassroots effort to protest excessive government spending and historic deficits. However, protesters denounced excessive spending and government bailouts, stimulus money, bonuses for corporate leaders, local taxes, socialism, fascism, immigration, gay marriage, and a host of other issues.

In Frisco, some of the partygoers seized the moment to protest the closures of Cape Hatteras National Seashore beaches to protect birds and turtles.

A sampling of signs from Frisco:

That pretty well covers the waterfront of all of the things that islanders are concerned about in a time of bad economy, soaring deficits, and, in our case, increased government regulation of access to our beaches. 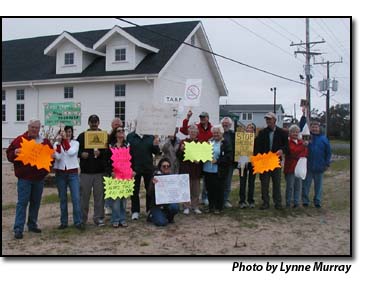 Looks to me that a lot of folks wanted to let off some steam yesterday about a whole range of issues, and they got the chance to do it. It was a little bit like a national day to protest anything and everything that really bugs you.

I hope that’s a healthy way of dealing with our anxiety about our life and lifestyle and our future.

I also hope that all of the partygoers – in Frisco and elsewhere – are registered voters and vote in every election.

Voting is the best way to have your voice heard and get the attention of your local, state, and federal lawmakers.

And I would be remiss if I did not mention that Johnny Conner and the folks from Conner’s Supermarket brought their cooker to the Frisco party to hand out hot dogs for lunch.

Appropriately, the dogs were all beef, no pork.