The first thing you need to know about this summer’s beach access on the seashore is that there will be beaches open to ORVs.

However, there will be some stretches of beach closed to both ORVs and pedestrians until the end of the nesting season – about August for birds and later in the fall for sea turtles.

The closed beaches may be your favorites, such as Cape Point or South Point on Ocracoke, but there will still be miles of beach open for walking and driving. There is more about this in an article I wrote in early March on this year’s beach access outlook.

Next, you need to know that full-beach resource closures may make some areas that are not closed to walking and driving inaccessible.

This is what happened on Monday when the Park Service closed access to Cape Point because of a pair of courting American oystercatchers on the beach just south of Ramp 44.

Cape Point is not closed – it’s just inaccessible because of closures on the north and west sides.

The closure is only 0.2 of a mile, and park officials say it is legal to wade in the water below the mean low tide line and walk to the Point.

They do not encourage this means of getting to areas that are still open.

There are safety concerns, at the points and spits especially, where the currents can be swift and the waves strong.

You would have to wade in water probably up to your knees to stay below the mean low tide line. If you get in trouble and are forced into a closed area or if you are unsure of your bearings and step into a closed area accidentally, you will still get a ticket if there is a park ranger around.

There is also another problem with trying to reach these popular areas by wading in the water.

If too many people are trying it, the birds might be spooked and leave the area. This could be more possible if the birds happen to be feeding near the low-tide line and encounter large numbers of folks splashing through the water.

If a park biotechnician observes people scaring birds and causing them to abandon their courtship or nesting, it is possible that the entire area could be closed down.

The court-ordered consent decree gives the seashore management the power “to enforce more protective closures or take other measures if they are deemed necessary.”

In the case of the closure north of Cape Point, the park superintendent might deem it necessary to close down the Point to protect the birds. 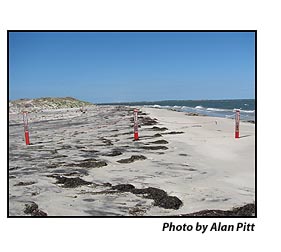 Cyndy Holda, assistant to the superintendent and community liaison, said that getting to deserted areas is a “prime opportunity” and a “different experience” for park visitors who want to fish, watch birds, or hunt for seashells.

She did it herself last weekend by hiking behind a full-beach closure at Bodie Island spit to reach an area still open but inaccessible without a hike behind the dunes. She wore boots, waded through some water, and thoroughly enjoyed a peaceful interlude on a quiet beach.

“It’s not for everyone, but it is an experience,” she said.

She does warn that a steady parade of hikers might disturb the birds and might be reason for expanding the closure.

Now back to Cape Point.

The Park Service bands oystercatchers, so it is able to tell if they return to nest and where they return. Most of the pairs in the park are regulars at certain beaches.

However, the pair that caused the closure at Cape Point are apparently interlopers who have not been in that area before.

Just down the beach in the closed pre-nesting area is another pair of oystercatchers who have regularly returned to that beach and apparently don’t like their new neighbors and are trying to chase them out of the neighborhood.

Maybe the interlopers will try to find another place to nest and another beach to close.

If that happened, access could be restored to Cape Point, though it would probably be only a matter of time before more birds try to move into that neighborhood.

Also note when you visit the beach this summer that the Park Service has announced its intention to crack down on unleashed dogs. This sounds like a “no tolerance” policy, so keep your dog on a leash no longer than 6 feet at all times.