The good news about the Memorial Day weekend report is that there really is not a lot of news.

And this is really good.

The weather cooperated ? only spotty, brief showers with light to moderate southeast breezes.

A lot of visitors came to Hatteras and Ocracoke, and, according to National Park Service rangers, they were largely well behaved.

Despite large beach closures required by the consent decree, the beaches that were open were not overly crowded.  Yes, there were more vehicles than a typical weekend, but when I drove the beaches on Saturday afternoon, there was still room on the shoreline for all beachgoers. 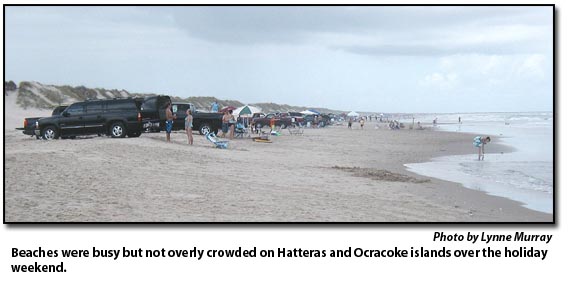 The resource protection area at South Point was expanded on Monday.  The beach is now open to ORVs only for nine-tenths of a mile west of Ramp 72 out to South Point.

No ramps had to be staffed to stop ORVs from going onto the beach until a vehicle left.  Last year, traffic was held up for a short time at Ramp 4 on Bodie Island to let vehicles on only as another left.

At Ramp 44, more of the beach to the south toward Cape Point was open than last year, when the beach area was largely a cul-de-sac.  There was also a pedestrian corridor along the tide line for most of the way to the Point.  Quite a few anglers with their rods and coolers were hiking out to the Point and they had to wade below the mean low tide line for only one-tenth of a mile of totally closed beach.

Holda said the one problem area over the weekend was at Bodie Island at Ramp 4, where there were ?numerous? arrests for alcohol-related charges.

Kenny Ballance, head district ranger on Ocracoke Island, also reported a great weekend on Ocracoke with the Park Service campground and marina full and ?only a few? citations.

Both McCutcheon and Ballance noted that they were pleased with the increased compliance with the regulation that prohibits dogs off leash.  McCutcheon noted an increase in personal watercraft violations this year.  PWCs are prohibited from launching or landing on seashore beaches.

All of the seashore?s rangers were on duty this weekend, McCutcheon said ? a total of 16. There were no rangers called in from other parks this year as happened last year when not all of the law enforcement slots were filled.  This year the seashore has a full complement of enforcement rangers.

In 2007, the Park Service began ?spot counts? of vehicles on the beaches.  The numbers don?t show a cumulative daily total, but rather reflect only the number on the beach at the time of the spot count. The counts are done by an NPS pilot in a plane.

The final counts of vehicles won?t be available until later in the week, but some counts from Saturday allow comparisons to last year.

McCutcheon said that at 2:30 p.m. Saturday, there were 315 vehicles at Ramp 49.  Last year, there were 308 on Saturday.  However, more of the beach was open this year to the west of Ramp 49, so the vehicles were less crowded.

On Saturday afternoon, there were 142 vehicles at Ramps 43 and 44.  This compares to 41 last year and reflects the extra beach open this year south of Ramp 44.

One of the most interesting things I saw on Saturday?s beach patrol was a piping plover nest just 75 meters ? just a hop, skip, and a jump — from the closure south of Ramp 44.

Park Service biotech Katie Bell was keeping an eye on the four-egg plover nest.  With the crowds just yards away from the nest on Saturday, the bird was incubating the eggs as folks fished, grilled, and walked along the pedestrian access on the shoreline.

When the nest hatches and there are plover chicks on the ground, the resource closure will expand to 1,000 meters, though Bell said that would not necessarily close Ramp 44.  The 1,000 meter closure, she said, will depend on where the plovers take the chicks to forage, which will not necessarily be in the area of the nest.

There are now five piping plover nests in the Cape Point area.

The N.C. Department of Transportation’s Ferry Division has canceled several trips scheduled for the Pamlico Sound routes between Cedar Island, Swan Quarter, and Ocracoke on Thursday, June 24, due to shoaling issues in the ferry channel. The following trips are canceled for Thursday on the Ocracoke-to-mainland ferry routes: 8:00 a.m. Cedar Island to Ocracoke, due [...] Local News |  Full Article

By Alana Harrison I read an article published this past week, “Ditch of Death: Navigation Dicey in Hatteras Inlet … again.” It tells of the recreational fisherman’s influence on Hatteras Village’s economy and how our Island’s commissioner worries about the “shoaling issues scaring away out-of-town vessels coming in for tournaments.” But you failed to cover [...] Fishing |  Full Article

Dare County offices will be closed on Monday, July 5, 2021, in observance of Independence Day. This includes the Manteo Recycle Yard, the Dare County C&D Landfill and the Buxton Transfer Station. All Dare County offices and facilities will reopen on Tuesday, July 6, 2021. Dare County Public Works, which provides trash collection for the [...] Community News Brief |  Full Article

Sponsorship opportunities are now available for the 2021 Outer Banks Seafood Festival.  The event will be held on Saturday, October 16, 2021 at the Soundside Event Site in Nags Head. The mission of the festival is to provide a fun and educational experience promoting, honoring and celebrating the region’s coastal seafood heritage and community.  Offerings [...] Community News Brief |  Full Article

BrightSpring, with $2.9M offer, becomes new operator By a 6-0 vote, the Dare County Board of Commissioners on June 21 approved the sale of the county’s Home Health and Hospice (HH&H) agency to the Kentucky-based BrightSpring Health Services for $2.9 million. Commissioner Rob Ross did not attend the meeting so could not cast a vote [...] Local News |  Full Article