The congregation at St. John United Methodist Church in Avon village has a new take on helping those who need it.

You’ve seen or heard of the Little Free Libraries? There is one in Waves that I have written about several times.

The idea is that you take a book and replace it with another when you can.

The new pastor at St. John, the Rev. Gina Miller, had seen a social media posting about the concept of tiny free food pantries and she brought it to the congregation.

The concept is the same — you can take food from the pantry if you need it and replace it when you can.

Miller said the congregation was really enthusiastic when she told them about it and two members set about to build the little “house” to store the items.

The tiny food pantry, she says, is “for everyone who might need to borrow a ‘cup of sugar.'”

Miller adds, “It is our hope that those who might need some extra assistance to meet their food insecurities  would visit our pantry for needed items. Our motto is ‘Get want you need, donate what you can.’ ”

She said the food pantry was installed a few weeks ago and is already doing a brisk business, even though it’s so small.

Church and community members are putting in items such as cereal, soup, peanut butter, jelly, canned tuna, and pet food.

Miller said the items are leaving and new ones are appearing on a daily basis. 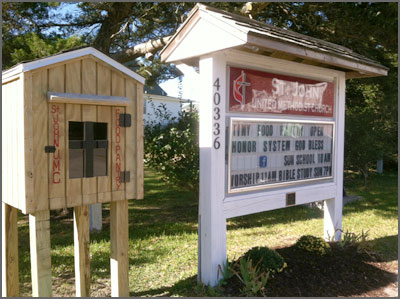 The food pantry is open, of course, 24 hours a day, seven days a week and all islanders and visitors are invited to borrow from it and donate to it.

The village of Avon is no stranger to ministries that involve food.

This will be the fourth year for St. John’s Thursday night dinners, which are open free of charge to not only church members but anyone on the island who wants food and fellowship.

The dinners were started by church member Denise Gaskins, who said simply, “God told me to do it…He said, ‘Feed my people.'”

So she did — and still does.

Gaskins is assisted by Renee Hering in planning and getting the dinners started, but an army of volunteers help the two women cook, serve, and clean up.

Most nights, she says, about 100 people attend — from 100-year-old church member Manson Meekins to families with babies in carriers.

In the dark and cold of winter, the dinners serve as a place for folks to gather to meet and greet and catch up on the news.

Some folks could well afford to pay for the dinner, but some probably can’t, Gaskins says, and it doesn’t matter. There is no charge, nor is there a donation jar. But, she added, in various ways, the dinners get paid for by people offering donations along the way, from small to large.

“Somehow the money comes in and everything comes together,” Gaskins says. “It’s been a blessing to me.”

The dinners will start this year on Thursday, Jan. 19, and continue until the end of March. They begin at 5 p.m. and serving continues until about 6:30, sometimes a little later.

Dare County has been chosen to receive $ 16,768 of Federal Emergency Food and Shelter funds awarded through the Department of Homeland Security and an additional $51,827 of Americans Rescue Plan Act (ARPA-R) funding. Under the terms of the grant from the national board, any non-profit, faith-based or local government agency that provides food and [...] Local News |  Full Article

As the temperatures on Hatteras and Ocracoke Islands drop in the winter months, cold-stunned sea turtles begin to make an appearance along the soundside beaches, and a number of turtles have been rescued in recent days after the Outer Banks’ cold start to the New Year. “Please be on the lookout for turtles during these [...] Seashore News |  Full Article

Story courtesy of Outer Banks Hotline Bronwyn Thornton, Executive Director of the Outer Banks Hotline, its board of directors, managers and employees would like to recognize the dedication and hard work of all our volunteers. Our volunteers are such a valuable part of our organization and we want them to know how much we appreciate [...] Island Features |  Full Article

N.C. Highway 12 remained open and passable as of Saturday morning, although minor ocean overwash was reported in Buxton with the morning’s high tide, per an update from the Dare County Sheriff’s Office. Sand and standing water have also been reported along multiple stretches of N.C. Highway 12, and travelers should proceed with caution. “North [...] Local News |  Full Article

No changes or cancellations for youth basketball at Fessenden Center

No Cancellations Scheduled for Saturday’s Youth Basketball Games at the Fessenden Center in Buxton The Dare County Parks and Recreation Department’s Hatteras Island Division has announced that there are currently no changes or cancellations for any youth basketball games that are scheduled to take place at the Fessenden Center in Buxton on Saturday, January 22, [...] Community News Brief |  Full Article

Hunting Family Fund for Health and Wellness Established at Outer ...

A new fund has been created at the Outer Banks Community Foundation to support local charities that help residents on their journeys to better health. The Hunting Family Fund for Health and Wellness, recently established by Rich and Cindy Hunting, has a stated purpose to “support projects and organizations that promote health and wellness for [...] Community News Brief |  Full Article