Even in its wretched, storm-battered state, the teetering Frisco Pier is still an Outer Banks celebrity, with photographs of it all over the Internet, and Facebook pages dedicated to it.

But by the end of the year, the remains of the iconic 55-year-old yellow pier house and rickety pier will be gone ? or at least, close to it.

Contractors are expected to start removing the wooden structure and its hundreds of pilings by the end of November or early December, said Dave Hallac, superintendent of the Cape Hatteras National Park Service.

Contractor Charlotte-based DOT Construction ? it?s pronounced like polka dot and has nothing to do with NCDOT – is currently building a new ADA boardwalk to the beach at Ramp 55 across from the Graveyard of the Atlantic Museum. When that is completed, Hallac said, the contractor will move its operation up to Frisco.

When a survey was conducted last year, he said, a total of 263 pilings were counted, most of them submerged. Of them, only 124 are above water. Divers were needed to find all the broken-off and buried pilings, and divers will also be needed to remove them.

Depending on the weather, the superintendent said, the $496,000 project is expected to be completed in about a month or two.

The demise of what is formally known as the Cape Hatteras Fishing Pier has been ongoing and tortuous, with nearly every storm knocking another piece into the ocean. Hurricane Irene in 2003 damaged it but Hurricane Earl in 2010 was calamitous, destroying huge sections of pier deck and leaving the remaining planks alarmingly awry and buckled.  And so it stayed, getting worse with every year. Planks and pilings have regularly washed up on shore and even over dunes onto Highway 12. 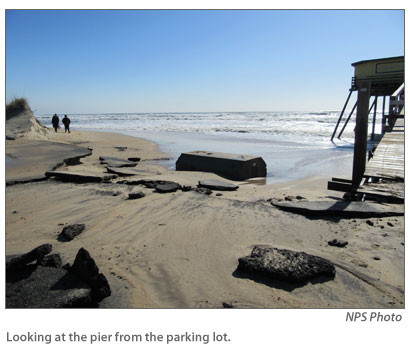 ?The state of the pier has become a safety concern,? Hallac said. ?Large pieces of it break off almost daily ? certainly after storms.?

Built in 1962, the pier and pier house were purchased by Tod and Angie Gaskill not long after Hurricane Isabel struck in 2003.  Over the years, the couple operated the pier business under a concession contract with the National Park Service, which owns the beach under the structure and the adjacent parking lot. But it was a struggle to keep up with expensive repairs. 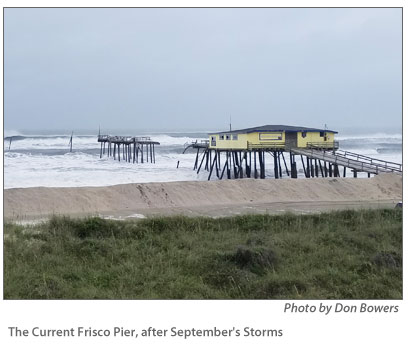 In a 2009 article in the Island Free Press, Tod Gaskill, owner of Top Dollar Construction and an island native, said he had put $100,000 into the pier to address Isabel damages, and $50,000 a year after that. But integrity of the repair work was compromised by as many as 130 defective pilings that needed to be replaced after only five years. The economic downturn added to the financial hit, and the pier stayed closed that year.

As it turned out, except for a brief period in 2010, the pier was never reopened for the season again, according to a 2016 article in Island Free Press. After sporadic attempts to rehabilitate and save the pier, including requests for help from the Park Service and from the community, in Sept. 2013, the couple sold the pier, the pier house, the parking lot and the road leading to it to the Park Service for $160,000, Gaskill said in an interview that year with IFP?s late editor Irene Nolan.

?I think it?s a raw deal for Hatteras Island,? he told Nolan after the sale. ?It?s a landmark for the island, and I thought it should stay there.?

Gaskill had also said that when negotiations with the Park Service stalled over funding complications, he had offered to hand over the pier to anyone who promised to restore and operate it. Ideally, he wanted it turned over to the county or the state, he said, or have the community establish a nonprofit to fix it and run it.  Ultimately, the public never got behind saving the pier.

?It?s just a sad thing,? Gaskill said then, ?that people never really did rally around it.?

Shortly after the purchase, the Park Service announced that the damaged pier would be demolished. Since then, a petition drive was started to try to save it, but failed to garner enough signatures. Meanwhile, a steady stream of people ? with professional equipment or cell phones ? have shot and posted online dozens of photographs of the oddly compelling image of the Hatteras Island landmark:  the spindly pier stubbornly clinging to its historic spot on South Beach, backlit by sparkling sunrises and pink sunsets; waves crashing on it, over it, through it; couples kissing in front of it; the squat pier house braced against surging surf. Even an online state tourism site features a classic shot of the Frisco pier house among favorite images of coastal attractions.

Once the pier is gone, the beach access will remain, which is good news for surfers and beach goers who have valued access to that beautiful beach as much, if not more, than the pier itself.  The Park Service intends to maintain the road and the parking lot, Hallac said. And in the near future, bathroom facilities – although probably not a bathhouse -will be added, he said.

In a perfect world, the Cape Hatteras Fishing Pier might have been restored not just for the sake of Hatteras Island history, but for the unique pleasure of fishing off a wooden pier where the Atlantic Ocean shoved and surged and slapped and sprayed right under your feet. But with the realities of nature, time, and funding, it is not to be.

?I understand the removal of the Frisco Pier might be an emotional issue,? Hallac said. ?There is no way for National Park Service to rehabilitate that pier ? it would cost millions and millions of dollars.?