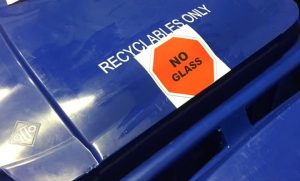 Blue recycling roll carts still remain, untouched, at some Hatteras Island residences, but it’s been more than two months since Hatteras Recycle in Salvo closed its doors for good after Hurricane Dorian. “That was the last straw,” Todd Phillips, who had started the business in 2007, said of the September 6 storm.

Phillips sold the business last year to Peter and Beth Eady, but he had retained a financial stake. Unfortunately, it was at just about the same time that China stopped accepting recyclables from the U.S. and the recycling markets crashed. In response, tipping fees to dispose of recyclables went through the roof.

Although Phillips, who now lives in Cape Cod, said that efforts were made to eliminate contamination of the product, and glass bottles were pulled out of the waste stream, it wasn’t enough. “They’re very nice people and they’re my friends, and I feel terrible about what’s happened,” Phillips said on Thursday about the Eadys. “I wish that this didn’t happen. People are just heartbroken.”

The Eadys had moved from Wilmington, N.C. to take over the business and built a home on Hatteras Island, Phillips said. The couple did not respond to a telephone message seeking comment that was left on their cell phone. A notice posted on the Hatteras Recycle Facebook page on Sept. 11 – five days after Dorian tore through the island – announced that the business was ending. “We wish to thank all of our recycling partners over the years,” it said. “This has been a heartbreaking decision to make.”

The post also said that the blue roll-up recycling carts would soon become regular trash roll carts. “I was real sorry when the private company stopped its service,” said Hugh George, who lives in the Askins Creek area in Avon. George and his wife moved full-time to Avon five years ago from the Philadelphia area, where they’d been recycling for years. They appreciated the convenience of the curbside pickup service Hatteras Recycle provided, he said. In an interview on Friday, George noted that islanders seem to fall into one of two camps when it comes to recycling: one that believes it all ends up in the trash anyway, and the other that believes recycling is the responsible thing to do for the environment.

Unlike other states, North Carolina does not outright require residents to recycle. The state, however, does not permit plastic bottles or aluminum cans to be disposed of in landfills. Still, it is clear from overflowing trash receptacles at the beach accesses that many people don’t bother to recycle plastic or aluminum. Much of it has to be sorted out before it is landfilled. Call it civic duty or force of habit, a lot of people in North Carolina – and on Hatteras Island – will not throw out bottles, cans or paper. “I think the people who want to recycle, they’ll do whatever it takes,” George said. “They just need to be clear about what they need to do.”

Along with numerous other die-hard recyclers, George has been regularly bringing his recyclables to the Buxton recycling center off N.C. 12 operated by Dare County. The site has multiple bins to deposit glass, plastic, aluminum, cardboard and paper, but it is not always clear what should be co-mingled or not, or even what items are acceptable or not.

For instance, George said a staff person told him that bottles or jars that have caps on them will automatically be thrown out. If that’s so, he said, he has never seen that written anywhere. Since every municipality, every state – even every collection center – may accept product that another will not, it’s not surprising that would-be recyclers can get confused. What about mixing paper and cardboard, or glass window panes with glass bottles? What about plastics – are only #1 and #2 accepted, or are #1 through #7 plastic accepted? Are waxed milk cartons accepted? George said that it is likely that many people are not even aware of the Buxton recycling center, or if they are, they may not know about the Rodanthe center. And as to an example of plastic confusion, George said apparently Buxton only accepts #1 and #2 plastics, but the tri-villages take all seven.

It was a lot easier when Hatteras Recycle took care of business. The business had provided curbside pick-up for about 600 tons of recyclables from 1,500 rental properties and 300-400 local residences on Hatteras Island per season. “What I’ve heard from past customers of the company,” George said, ‘is ‘I wish that it had been successful.’” Phillips said he has forgiven the Eadys any debts. “I don’t want that on my conscience,” he said. But he still is in disbelief that the U.S. recycling industry is in such disarray – and that it happened so quickly.

“It’s just terrible that a country like ours doesn’t have the infrastructure,” he said. “There’s got to be places that accept recyclable plastic and they have to make something from it. We’re knee-deep in plastic.” The solution could be as simple as raising the price of virgin plastic, he said, which would provide the incentive to re-use plastic. But without recycling, the landfills are going to fill up quickly, and the planet will be littered with garbage – especially plastic – that never goes away. “It’s incredibly short-sighted,” Phillips said. “We’ll be knee-deep in plastic. That’s the future.”

Proving just how busy 2021 was on the Outer Banks, the recovery in visitor spending was also felt statewide in 2021 according to data released Wednesday by the N.C. Department of Commerce. Dare County generated the third most spending of any county in North Carolina in 2021 of $1.826 billion, behind only Buncombe (Asheville) and Wake [...] Local News |  Full Article

The National Weather Service and Dare County will be hosting a pair of hurricane awareness forums on the Outer Banks on August 25 in Manteo and August 26 in Buxton. These forums are discussions and include short presentations from the NWS and the county on specific information for hurricane season. By design the National Weather [...] Community News Brief |  Full Article

On Saturday, September 17, the North Carolina Beach Buggy Association (NCBBA) will once again launch its Operation Beach Respect program, where NCBBA members and volunteers are stationed at every beach access ramp from Bodie Island to Ocracoke to hand out information packets and trash bags to beachgoers. Celebrating its 38th year in 2022, Operation Beach [...] Local News |  Full Article

The Dare County Register of Deeds has issued a notice reminding citizens that the department offers a free 24/7 fraud detection notification system for Dare County residents and property owners. The purpose of this service is to provide citizens with email notifications when a document is recorded within the Register of Deeds office that matches [...] Community News Brief |  Full Article

If one were to produce an event that would be pure Ocracoke, an attraction for both islanders and visitors, one might say, how about figs? Eight years ago, people did and the Ocracoke Fig Festival has become a major summer attraction. The recent event Aug. 4 to 6 drew about 300 attendees and another round [...] Island Features |  Full Article

The Manteo and Kill Devil Hills branches of the Dare County Library have announced the introduction of two book clubs for adults that will begin meeting in September 2022. The Dare County Library has long recognized the need for more community activities that serve its adult patrons, and the request for a book club hosted [...] Community News Brief |  Full Article