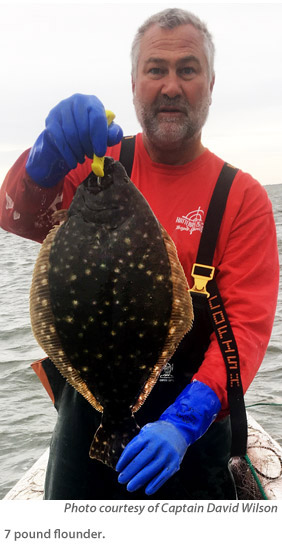 October started out in the mid 80s but has finally settled in to normal, cooler temperatures.  Everything has been running late this year, but lately the fishing has been great.

The offshore boats have done well with great catches of wahoo this month, as well as dolphin, yellowfin tuna and blackfin tuna.  October has also provided anglers with outstanding bottom fishing.  Spurgeon told me that he has seen some of the best fishing he has seen in years.  Besides triggerfish, vermillion snappers and silver snappers have shown up in big numbers as well.  Live bait king mackerel fishing should be starting now.  It’s as much action as you can have with a rod and reel.

Drum fishing has been off the chain for the inshore boats.  Sight casting to the big boys and bait fishing have both been productive.  Every size they make is out there right now!  Speckled and gray trout have both been abundant, giving fishermen lots of great action casting grubs and artificials.  Bluefish and Spanish mackerel have still been around the inlet and up and down the beach, near shore in the ocean.  There have been a number of flounder caught, particularly by the giggers, but last I heard, it was starting to slow down.

I took a ride out to Cape Point a week ago, and it would have been hard to find a parking spot.  The big red drum fishing has been good in the surf, if that’s your thing.  I’ve heard more mention of black drum in the surf this year than I can remember, as well as sea mullet, pompano, puppy drum and speckled trout.  Throw in a few blues and Spanish, and you’ve got quite the assortment of good eats!

Commercial fishermen are coming into a busy time of year, as there are several species that can be lucrative to fish for in the fall.  Long liners will be bringing in good catches of yellowfin and big eye tuna, as well as swordfish during the fall.  Normally, these guys stay out for a few days at a time to get a good catch.  Closer to home, king mackerel fishermen are cranking new wire on their downriggers and rods, getting ready for the fall trolling season.  Gillnetters have still been catching Spanish mackerel and bluefish in their small mesh nets, and soon the sea mullet will be plentiful enough to scrap out some days on them.

In the sound, I am currently fishing gill nets for flounder.  It’s been an odd year with the unusually warm temps.  The flounder didn’t really start moving until the water temperature began to drop, and that happened WAY later than normal.  Since the cool down, we’ve had some pretty good fishing, however, it’s cooling down too much, too quickly, and it may leave us with a short season if the fish get gone.

It’s a great time for fishermen and beachcombers to enjoy a quieter time on the beach.  Sweatshirts in the morning now, instead of t-shirts, and I’m just about to retire the board shorts for 2018.  Pack up your duffle for a weekend trip to Hatteras.  I’ll see you for breakfast at Sonny’s!

The N.C. Division of Marine Fisheries wants to remind the public to report any cold stunned spotted seatrout they may see in North Carolina coastal waters. During the winter, spotted seatrout move to relatively shallow creeks and rivers, where they can be vulnerable to cold stun events. Cold stun events have the potential to occur [...] Fishing |  Full Article