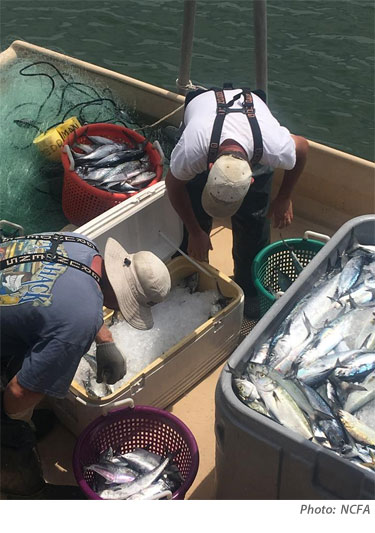 Many North Carolina commercial fishermen will soon receive letters asking them to verify their landings for a Hurricane Florence Commercial Fishing Assistance Program.

Last week, Gov. Roy Cooper signed a bill that appropriates $10 million to the Division of Marine Fisheries to compensate commercial fishermen and shellfish harvesters for income losses from harvest reductions due to Hurricane Florence. This is in addition to the $1.6 million that was appropriated in October for hurricane relief to be distributed by the Division of Marine Fisheries to commercial fishermen.

Distribution of the money will be based on reported landings in September, October, and November for the previous three years.

In preparation for disbursement of the money, the division will send certified letters to commercial fishermen who are residents of North Carolina and who held a valid, current Standard or Retired Standard Commercial Fishing License or a Shellfish License for N.C. Residents without a Standard Commercial Fishing License during September 2018. The letter will invite them to participate in the program and ask them to verify their landings data.

Enclosed with the letters will be a summary of the fisherman’s September landings for 2015, 2016, 2017 and 2018. Fishermen should review the information and contact the division immediately if there is a dispute about the reported landings.

Letters regarding landings from October and November will be sent later, after data entry for those months is completed.

Also included with the letter will be a response form and a State of North Carolina Substitute W-9 Form to return to the division by January 4, 2019 confirming participation in the Hurricane Florence Commercial Fishing Assistance Program. Failure to return the response form and W-9 Form to the division by the deadline shall be considered a decision not to participate in the program.