As July comes to a close, we are once again faced with high winds and thunderstorms interrupting fishing days. The initial concern this year had been rising fuel prices causing boaters and surf fishermen alike to think twice about going out, but now it seems the volatile weather is adding insult to injury.

This week, offshore charters have been few and far between, and although inshore boats have been more likely to get out, conditions are still far from ideal. Boaters are faced with rough and potentially dangerous rides. And although surf fishing can be better in high winds, especially for drum, many people over the past week have complained that getting sandblasted and fighting the strong currents just hasn’t been worth it. While we haven’t faced any major storms this season, these bouts of rough weather seem to be more common this year.

With that being said, when conditions have been better, the fishing has been very good. Anglers on the beach and sound have seen Spanish mackerel, slot-sized drum and bull reds, plenty of bluefish and speckled trout, plus some nice pompano around Hatteras.

Offshore catches are turning up a lot of wahoo lately, and the dolphin bite is still steady most days. For those going bottom-fishing, we’ve seen some grouper and a lot of triggerfish filling the fish boxes.

As of now, the high winds look like they’ll continue throughout the coming week, but will hopefully settle down again as we move into August. Charter, commercial, and recreational fishermen are all anxious to get back out and get hooked up.

Luckily, although it feels like summer is on its way out, the fishing season is far from over, and we hope to see plenty of fishable days ahead! 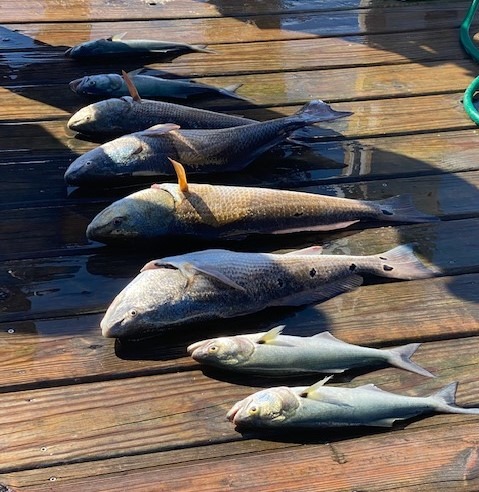 Hatteras native and fishing icon Ernie Foster was honored at the 19th annual Carolina Boat Builders Tournament on Thursday evening, July 28, as representatives from the Dare County Boat Builders Foundation paid tribute to a local legend. Ernie Foster was a prominent fixture throughout the evening’s honorary “Captain’s Night” dinner, from the cover of the [...] Fishing |  Full Article

The 13th Annual North Carolina Beach Buggy Association (NCBBA) Red Drum Tournament will be here soon, (from October 19-22), and registration is currently open to the public. Check-in starts on Wednesday, October 19, in the morning. The tournament is open to anyone who wishes to register and is not an invitational. Fishing starts Thursday at 12:01 [...] Fishing |  Full Article

As July comes to a close, we are once again faced with high winds and thunderstorms interrupting fishing days. The initial concern this year had been rising fuel prices causing boaters and surf fishermen alike to think twice about going out, but now it seems the volatile weather is adding insult to injury. This week, [...] Fishing |  Full Article

State certifies new state record Graysby Grouper that may be a wor ...

As July 4th approaches and families prepare for cookouts and long days on the beach, many people will be on the water or shorelines with a rod in hand looking for their next catch. With fishing in full swing this season, anglers are getting in as much time on the water as they can before [...] Fishing |  Full Article

NOAA annouces changes to Dolphin and Wahoo Fishery in the Atlantic

Recreational Blueline Tilefish in South Atlantic Federal Waters Will Open on May 1, 2022, and Close on July 26, 2022