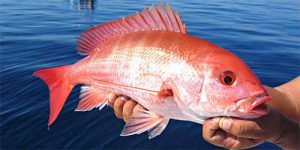 The South Atlantic Fishery Management Council will hold public hearings and scoping meetings in January and early February to solicit input on proposed measures for species in the snapper grouper management complex. Management measures are proposed for Gag, Black Grouper, and Red Snapper to help address release mortality. The Council is also soliciting public input on options to establish a federal permit for the private recreational component of the snapper grouper fishery.

Additional information about the upcoming hearings, including public hearing documents and online public comment forms, are now available from the Council’s website: https://safmc.net/public-hearings-and-scoping/.

Per the South Atlantic Fishery Management Council, the annual catch limit (ACL) for Gag must be reduced because the stock is overfished and undergoing overfishing. Snapper Grouper Amendment 53 will establish a rebuilding plan for Gag, reduce the ACL for both commercial and recreational sectors, modify sector allocations, and establish recreational vessel limits for both Gag and Black Grouper.

Six in-person hearings and one webinar hearing will be held for Snapper Grouper Regulatory Amendment 35 addressing Red Snapper catch levels. The amendment also includes a proposed action to reduce release mortality for all snapper grouper species by restricting the recreational sector to the use of single hook rigs when targeting snapper grouper species.

Location details are available at: https://safmc.net/events/jan-2023-public-hearings-snapper-grouper-regulatory-amendment-35/.

The Council is soliciting public comment on options to establish a federal permit for the private recreational component of the snapper grouper fishery through Snapper Grouper Amendment 46. Scoping meetings are held early in the decision-making process to get public input on options being considered.

Public scoping meetings are scheduled for January 30, 2023, and February 6, 2023, via webinar. Additional information will be posted as it becomes available at: https://safmc.net/events/jan-feb-2023-public-scoping-snapper-grouper-amendment-46/.