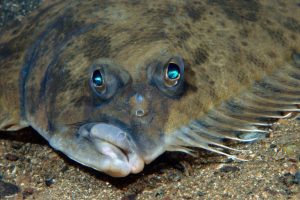 The N.C. Marine Fisheries Commission voted today to amend the previously adopted sector allocations for Amendment 3 to the Southern Flounder Fishery Management Plan to gradually equalize allocations between the commercial and recreational fisheries.

In February, the commission had selected sector harvest allocations of 70% commercial and 30% recreational for the duration of Amendment 3. That allocation was similar to the harvest landed by each sector in 2017, the terminal year of the stock assessment on which draft management measures in Amendment 3 are based.

Chairman Rob Bizzell called today’s meeting to revisit this issue after the commission received a large amount of public comment on the February decision.

The allocation decision is needed to facilitate commercial and recreational quotas as proposed in draft Amendment 3. The change in allocation may impact the timeline for final adoption of the amendment.

by Robert Michelson Bluefish are found along the East Coast from Maine to Eastern Florida. They arrive in North Carolina waters in early spring, while pursuing forage species including menhaden, anchovies and Atlantic silversides as they return to nearshore waters. Bluefish are also known as blues, snappers, choppers and Taylor blues, according to the state Division of [...] Fishing |  Full Article