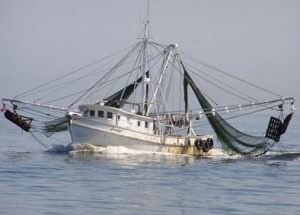 On Thursday, the North Carolina Marine Fisheries Commission (MFC) voted 5-4 against a rulemaking petition that would have placed certain conditions on shrimp trawling in order to reduce the bycatch of juvenile fish such as spot, Atlantic croaker and grey trout.

The petition, put forth by the North Carolina Wildlife Federation, asked the commission to designate all internal coastal waters not otherwise designated as nursery areas as Shrimp Trawl Management Areas. The now-defunct petition also outlined gear and time restrictions within these new areas.

The 5-4 vote occurred on the second day of the multiple-day MFC meeting, which is currently being held in Raleigh from August 21 through 23.

On Friday, the MFC is expected to vote on final approval on the Draft Amendment 2 to the Southern Flounder Fishery Management Plan that was put forward at a special meeting on June 6.

Draft Amendment 2 calls for a reduction in southern flounder harvest to be achieved through “season closures for the commercial and recreational sectors, and consideration of yardage and time restrictions for gill nets and daily harvests limits for pound nets and gigs,” per a press release from the N.C. Division of Marine Fisheries. Locally, the Dare County Working Watermen Commission and Board of Commissioners have spoken out against the amendment.

The amendment proposes a 62% reduction in southern flounder harvest (compared to 2017) in North Carolina this year and a 72% reduction in harvest beginning in 2020 to be achieved through commercial and recreational season closures. The division also proposes yardage and time restrictions for gill nets and prohibiting the use of puncturing devices, such as gaffs, in the pound net fishery. If approved, the management measures would become effective immediately following the meeting and stay in place until adoption and implementation of Amendment 3 to the Southern Flounder Fishery Management Plan, scheduled for completion in 2021.

The MFC is also expected to vote on the Blue Crab Fishery Management Plan Amendment 3 on Friday as well. A complete agenda for the meeting can be found at http://portal.ncdenr.org/c/document_library/get_file?p_l_id=1169848&folderId=33187918&name=DLFE-141123.pdf.

The vote is expected to occur on Friday at around 10 a.m., and the public can listen to the live audio streaming of the meeting via http://portal.ncdenr.org/web/mf/mfc-meetings.