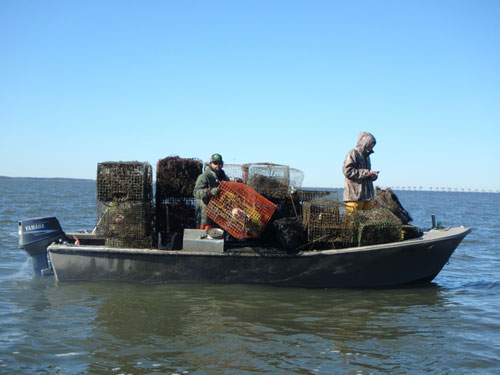 The North Carolina Coastal Federation is set to begin its sixth year of the Lost Fishing Gear Recovery Project this week, when 78 commercial watermen along the coast will set out into the sounds to collect lost crab pots.

The federation is partnering with North Carolina Marine Patrol for this project, which is funded by $100,000 from the North Carolina General Assembly. The project received grant monies from N.C. Sea Grant and the National Oceanic and Atmospheric Administration (NOAA) Marine Debris Program in the inaugural year, 2014, where cleanup efforts only took place in the northeastern North Carolina waters.

As of January 2017, this project has expanded statewide to all internal coastal waters thanks to continued funding from the General Assembly. During the 2018 project, over 2 million acres of waterways were canvassed to recover a total of 3,496 crab pots by 76 watermen along the coast.

These cleanup efforts are timed with the annual closure, spanning Jan. 15 to Feb. 7, of internal coastal waters to all crab, eel, fish and shrimp pots, commonly called the “no-potting” period. Pots can become lost in many ways and get hung up or drift into channels creating hazards to boaters and wildlife.

This year, the federation received more than 60 applications from interested parties and 39 crews have been selected to assist with the on-water cleanup. Combining the efforts of the commercial license holders and marine patrol officers have proven successful during the history of this project. This project improves fish habitat and water quality and supports the coastal economy. Once the pots are collected, they are recycled to the best extent possible.

“I’ve seen great success in the partnerships involved with this cleanup work over the past several years,” Chad Hemilright, project participate from Kitty Hawk shared. “Being on the water nearly every day as a full time commercial fisherman, it’s important to remove the lost pots and keep our waters clean and safe.”

Sara Hallas, coastal education coordinator for the federation and project leader, said she’s excited to clean up the waterways and create opportunities for work during this time of the year.

“We’re thankful to the General Assembly for their continued support, which is vital to the success of the project,” Hallas said. “This project also wouldn’t be possible without the support of community organizations and our commercial watermen and women, who have consistently expressed that helping with this project and protecting waterways is important to them.”

The boat crews will depart from the docks every morning at 8 a.m. and return at 2 p.m. once the project is underway, beginning around Jan. 17. Members of the media who would like to schedule a visit to the docks on cleanup days should contact Sara Hallas at 252-473-1607 or sarajh@nccoast.org as soon as possible in order to coordinate an appropriate time. Visits will be weather-dependent.

This project is part of the federation’s overall marine debris reduction campaign. The federation’s Wanchese office kicked off this campaign with a volunteer cleanup near the public boat ramp in Rodanthe on Jan. 12, where the federation partnered with Dare County.

For more information on the progress of the Lost Fishing Gear Recovery Project over the past five years, visit nccoast.org/crabpotproject.