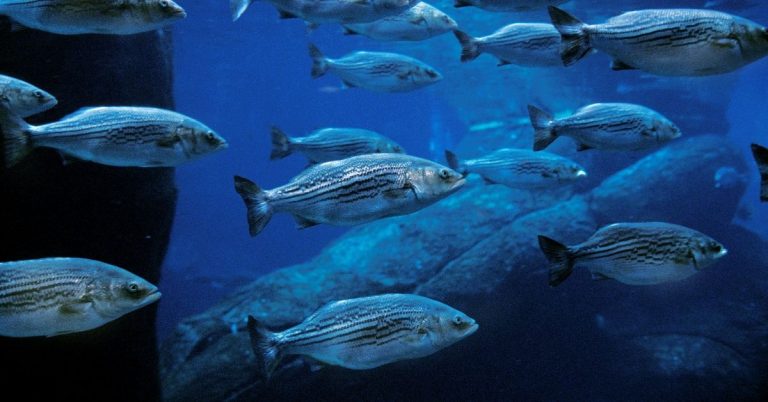 As the cooler weather and water approaches so will the Striped Bass or Stripers as we call them in the Carolinas. The time of their arrival varies, thanks to multiple factors, but most importantly is the water temps along the Atlantic coast.

Stripers are anadromous, meaning they spend most of their lives living in saltwater but migrate into freshwater rivers to spawn. The Stripers chose to spawn among the rocky rapids near the “fall line” where rivers shift from the hilly piedmont to the flat coastal plain. North Carolina’s Roanoke River is well known as a key Striped Bass spawning ground. Every spring, adult Stripers make their way from the Atlantic Ocean and Albemarle Sound into the Roanoke River to spawn, about 130 miles from the sound. Most Striper’s spawning begins when the water temperature reaches 62ºF. As many as 20 male Stripers surround a single female, releasing milt that will fertilize the eggs released by the female. 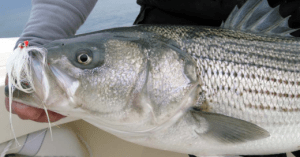 The arrival of the larger Stripers, those in the 28 inches and above are spawning fish, is determined by the timing of the spring spawn. Spawning takes place earliest in the Chesapeake Bay, as Striped Bass move from their wintering grounds off North Carolina and Virginia into the Bay in mid-March. After hatching, young Stripers (called yolk-sac larvae) are carried by the strong current to nursery areas in the lower Roanoke River and western Albemarle Sound. For the first seven to 14 days, they live by getting energy from their yolk-sac (formerly the yolk portion of their egg). After their yolk-sac is used up, the Striper larvae feed on small water animals known as zooplankton. By the time they are two months old, strippers are one to two inches long and begin feeding on small fish. The Stripers that spawned in the Roanoke River usually spend the next two to four years maturing in the Albemarle Sound before returning to spawn in the Roanoke River. Because they can live over 20 years, adult Stripers may migrate many times from the Atlantic Ocean through the Albemarle Sound and to the Roanoke River to spawn during their life span.

Stripers are considered one of the most important food and game fish found in the coastal waters of the United States and that’s especially true in North Carolina. The Striper population was severely depleted due to overfishing, water pollution, and changes in river flows, but recreational and commercial fishermen are again able to enjoy catching and harvesting Striped Bass now that populations are restored, thanks to the various conservation regulations that exist today.