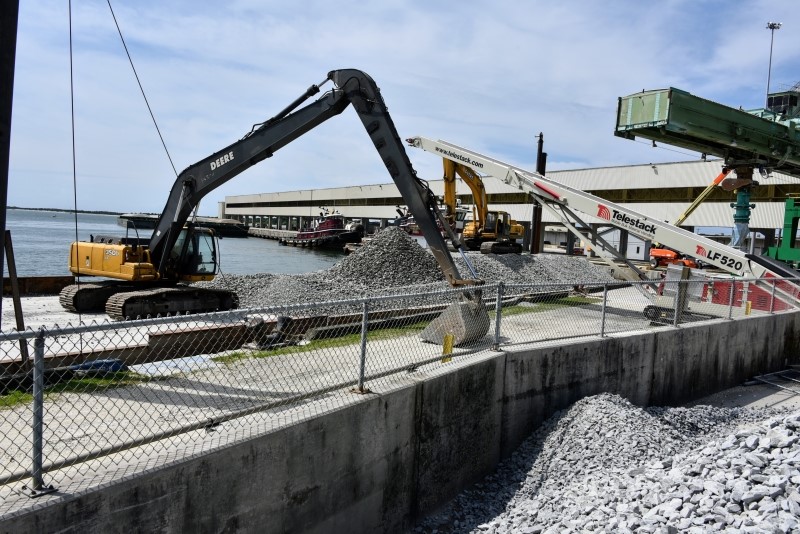 The last phase of the Swan Island Oyster Sanctuary is nearing completion, bringing 40 acres of oyster reef to life in Pamlico Sound.

Construction on the Swan Island Oyster Sanctuary wraps up this month and on July 8 the North Carolina Coastal Federation will host a media tour of the final deployment.
For the past three years, the federation and the North Carolina Division of Marine Fisheries have worked to build this 40-acre oyster reef in Pamlico Sound, contributing to an ambitious goal to restore 50 million oysters in North Carolina waters by 2020.

Each spring and early summer since 2017, the Division of Marine Fisheries and contractors from Stevens Towing Co. Inc., have worked to strategically place thousands of tons of limestone marl and granite in the sound to build new oyster habitat. This material serves as a base for baby oysters, known as spat, to land on, colonize and grow up.

The Swan Island Oyster Sanctuary is one of 15 oyster sanctuaries in Pamlico Sound. This network of sanctuaries, the Senator Jean Preston Oyster Sanctuary Network, is designed to grow new oysters. While reefs in this network are not open to harvest, they are open to hook and line fishing. As the oysters reach maturity, they repopulate, sending their baby oysters to nearby harvested reefs and to seed the state’s cultch planting reefs. It’s all part of a plan to regrow our state’s oyster population and the sanctuaries are doing a good job of growing oysters.

“We recently completed a comprehensive survey of reefs in Pamlico Sound, including reefs that are harvested, natural, intertidal and subtidal. And what we found, is that while subtidal sanctuary oyster reefs in Pamlico Sound only occupy about 6% of the total footprint of oysters, they account for an estimated 40% of the oyster population in Pamlico Sound,” reported Dr. Dave Eggleston, director of North Carolina State University’s Center for Marine Science and Technology.

“Furthermore, these sanctuaries are hosting oysters at densities nearly ten times higher than the other reef types that we monitored.”

“We’re encouraged by the success of the sanctuaries,” said Erin Fleckenstein, coastal scientist in the federation’s Wanchese office and project manager for the restoration project. “They provide insurance for our oyster population in Pamlico Sound. They host adult oysters that help to repopulate our harvested reefs while also filtering the sound and providing habitat for other fish.”

As a complement to the sanctuary construction, the Division of Marine Fisheries has built nearly 145 acres of cultch planted reefs statewide. Some of these are in close proximity to the sanctuary where they can receive spat. These cultch reefs will be open to harvest when oysters reach the legal size of 3 inches.

The effort to restore our oyster populations is especially important after the critical blow that oysters got last fall. With two major hurricanes, Florence and Michael, the oyster population was hit hard. Impacts associated with stormwater runoff, low oxygen water and sediments, decimated oyster populations across the state. It was an impact that was felt by many harvesters during oyster season.

However, a preliminary survey completed after the storms showed that the Swan Island Oyster Sanctuary survived and had very high spatfall counts, indicating recent oyster settlement. While this may have been a stress response to the storm, recruitment and survivorship were strong on this reef. The sanctuary will help to reseed nearby cultch planting sites.

This restoration project is part of the 50 Million Oyster Initiative. The initiative aims to build 50 acres of oyster reef by 2020. Each acre supports approximately one million oysters and those 50 million oysters will filter 2.5 billion gallons of water per day.

With the conclusion of the Swan Island Sanctuary, the Division of Marine Fisheries will be working with the federation and partners to identify locations for future restoration efforts. The North Carolina General Assembly has approved $1.5 million in their recently released conference budget to continue building these reefs.

More information on oyster restoration work is available at nccoast.org/oysters and ncoysters.org. 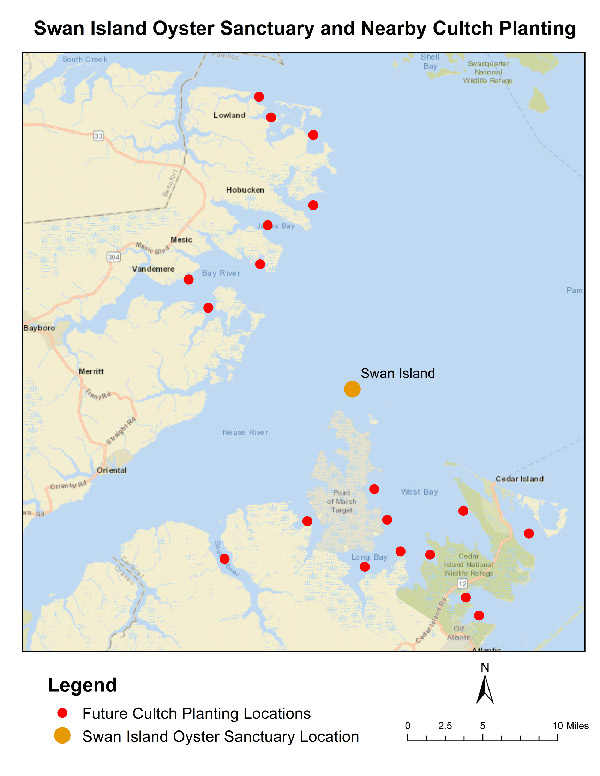 Anglers who want to commemorate that big saltwater fishing catch in 2021 have a couple of extra weeks this year to apply for a citation from the N.C. Saltwater Fishing Tournament. The Division of Marine Fisheries has extended the application deadline for 2021 citations to Jan. 31, 2022 from the normal deadline of Jan. 15. [...] Fishing |  Full Article

The sea robin is one weird-looking fish. They have some of the largest pectoral fins of any bottom dweller I have ever seen in the Atlantic. When fully extended, they look like a single-engine Cessna’s wing, except underwater and on the bottom. These fish also have adapted pectoral fin rays just below their gills that [...] Fishing |  Full Article

By Hannah Ross Guest commentary It may sound too good to be true that one, palm-sized organism could filter water, provide habitat, secure the coastline, and be a delicious, nutritious powerhouse on the plate. But it’s not a gimmick — the oyster does it all. In North Carolina, a consortium of government, university, business and [...] Fishing |  Full Article

Due to increased cases of COVID-19 in North Carolina, three upcoming Marine Fisheries Commission advisory committee meetings will be held by web conference only. The advisory committees are scheduled to review and accept public comments on the Draft Southern Flounder Fishery Management Plan Amendment 3. Those who wish to speak during the public comment sessions [...] Fishing |  Full Article

Dare County has released a video titled, “Dare County’s Commercial Fishing Industry: Safeguarding the Community’s Longstanding Heritage by Supporting the Livelihoods of Local Fishermen,” as part of the county’s ongoing effort to inform members of the public as well as state and national legislators about the impact that increased regulation is having on the those [...] Fishing |  Full Article

The Atlantic bluefin tuna season ranks high enough up on the fishing world calendar that the fish even has two of its own television shows. This species is one of the largest open ocean migratory species of finfish found in the northwest Atlantic. Many fish are caught weighing well over 1,000 pounds and measuring 8 [...] Fishing |  Full Article

Members of the Dare County Waterways Commission have reason to celebrate this holiday season, with reports from fishermen and charter boat captains that the recent dredging of the South Ferry Channel is holding up nicely. “They say the flow going east-west through there — it’s a much better flow than what we had going across [...] Fishing |  Full Article