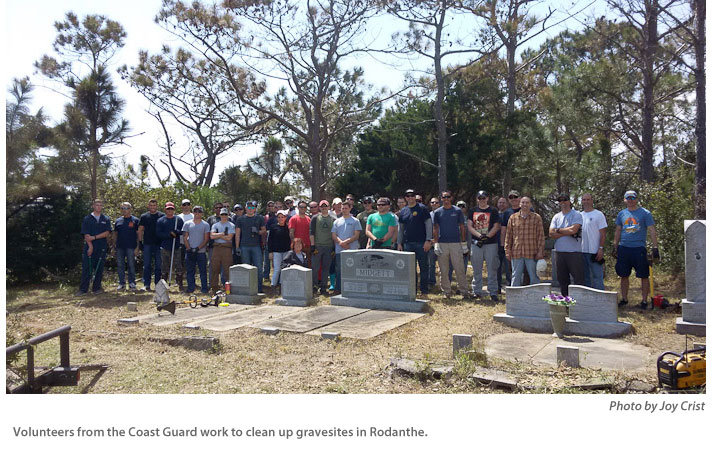 On a stormy Friday morning, several dozen U.S. Coast Guard personnel from the Outer Banks area and miles beyond met in Rodanthe to tackle maintenance projects at two historic cemetery sites that are located just off the beaten path.

The initiative was part of an ongoing community service project where Coast Guard members volunteer their own time, materials, and manual labor to honor the local gravesites of original Life-Saving Service and Coast Guard members.

The first wave of efforts began in April, when roughly 65 volunteers made an initial “clean sweep” of four cometary sites in the tri-villages area, where decades of brush and debris had all but covered the gravesites.

Friday’s project entailed installing a new fence around the cemetery where the final resting place of Rasmus S. Midgett is located – a small patch of land that’s across the street from Lee O’Neal Road, and which is tucked away behind the Hatteras Realty building.

A local legend, Rasmus was a surfman with the Chicamacomico U.S. Life-Saving Station, who on August 18, 1899, rescued crew members from the barkentine Priscilla. Working alone, Rasmus swam to the wreckage three miles south of the Gull Shoal Station to assist the survivors who were too exhausted to swim ashore. He received a Gold Lifesaving Medal for this historic rescue from the Secretary of the Treasury in October, 1899.

His son, Arthur Vanburen Midgett, also received a Gold Lifesaving Medal as one of the Chicamacomico Station’s surfmen who participated in the famous Mirlo rescue, which celebrated its 100th anniversary in 2018. Arthur is also buried at the small cemetery, along with other family members who were connected with the Life-Saving Service and / or the later U.S. Coast Guard.

“It’s not often that we have one, let alone two Gold Lifesaving Medal recipients in the same graveyard,” said Timothy Tamargo of the National Strike Force (NSF) and Coast Guard Personal Affairs Specialist. “There are two prominent people buried here, so this is a wonderful community service project to take on.”

The ensuing project did have a few challenges, however. A coastal storm in the immediate forecast brought heavy winds and afternoon rains for the volunteers, but the deteriorating conditions didn’t phase the Coast Guard members or slow down their work in the slightest.

“There’s a little wind and a little rain, but we’re certainly used to working in bad weather,” said Tamargo.

The fence that originally bordered the cemetery was in deep disrepair, and it was unclear how long that it had protected the site, although several volunteers speculated that it was likely erected in the 1980s or early 1990s.

After removing the rotting fence – a process that literally took minutes – a new fence began to take shape, with materials that were generously donated by Kempsville Building Materials in Buxton.

The volunteers for Friday’s clean-up project     were primarily Coast Guard chiefs or chiefs in training, and included members of the Sector Field Office Nags Head / Cape Hatteras, the U.S. Coast Guard Station Hatteras Inlet, the Air Station Elizabeth City, the National Strike Force, the Aviation Technical Training Center, and the Aviation Logistics Center. Many of the volunteers also made a long trek from the Elizabeth City station to lend a hand – a trip that was complicated with heavy traffic, as well as the weather.

But regardless of the initial obstacles, once the U.S. Coast Guard volunteers were on the scene of the cemetery, the operation ran like a well-orchestrated rescue. Some volunteers immediately set to work on removing brush and debris that had arrived with the onset of Tropical Storm Michael, while other volunteers started to dig fence holes or take measurements.

By the afternoon, the team had split into two groups so that a second graveyard could be addressed in the Tri-villages, which had also been impacted by soundside flooding and debris from the fall tropical storm.

The idea for regular clean-ups of historic cemeteries throughout the island first popped up in early 2018, when Engineering Petty Officer Chief Jamison Smith and Chief Warrant Officer Ryan Gentry, (who has familial ties to the area), got together to discuss a number of gravesites that were in dire need of maintenance. Decades if not centuries old, and quietly located behind modern rental homes and businesses, the graves of these past heroes were veritably hidden in plain sight, but had been covered by years of tree and brush growth.

“There are gravesites everywhere throughout Hatteras Island,” said Chief Smith in an earlier interview, “and we’re just hitting the tip of the iceberg. We looked for ties with the Life-Saving Service and the U.S. Coast Guard, and that’s where we started, but there’s a lot more to do.”

Chief Smith noted that another clean-up is planned in November, this time at a site in Hatteras village.

“There are a couple places we have leads on, and we are continually getting requests to help,” he said. “With all the history in this area, it’s a great project we can do for the community.”

And when it comes to tackling sites that have succumbed to decades of overgrowth and deterioration, it’s incredible what the all-volunteer U.S. Coast Guard crew can accomplish in just a few hours’ time. By the end of the day, both sites were perfectly cleared once again, and the new fence that shielded the gravesites of Arthur Midgett and Rasmus Midgett was fully in place, and standing strong.

“All of the lifesaving history here is amazing, and we’re glad we can help to honor it,” said Tamargo. “In doing this project, we can help tell the story of the Midgetts, and of the U.S. Coast Guard.”

OVFD Firemen’s Ball to return May 28