Chicamacomico Banks Fire & Rescue volunteers conducted a recent beach clean-up along a stretch of Rodanthe shoreline that was cluttered with leftover debris from late fall storms.

Working over the course of several days, the team of volunteers filled up a total of four dumpsters, and had to utilize an additional 40-yard container provided by Dare County to remove massive amounts of debris that had accumulated along the beach.

“For years, we’ve all gotten together and conducted beach clean-ups after storms,” said Captain Jeremy Carpenter. “After the holiday, [we] realized how much debris was on the beach in what we call the ‘Campground Zone’ – near Camp Hatteras, KOA, and Ocean Waves [Campgrounds.]”

“As a surfer, I don’t want to be surfing and get hit by debris, and I don’t want our residents and visitors to walk down the beach and step on a board with a nail on it,” he said. “And when we get a southwest blow, it will cover up the debris… I’ve had local kids tell me they’ve stepped on a nail before, and didn’t even see it in the sand.”

The wave of debris in the Rodanthe area most likely stemmed from the most recent nor’easter in November of 2019. The fall storm caused erosion and ocean overwash throughout the Tri-villages, which in turn lead to property damage and subsequent materials being deposited along the shoreline.

“The November storm was a significant event that took out the dunes and ripped stuff apart along that part of the beach,” said Carpenter. “Subsequent extreme high tides continued to erode the area and dump debris down the beach, which apparently all piled up near the campgrounds.”

Because of these concerns, the idea of a beach clean-up was floated at the most recent meeting of the Chicamacomico Banks Fire Department, and a number of volunteers stepped up to the plate to lend a hand.

It ended up being a large undertaking.

“I was just astonished at how much debris was in that area,” said Carpenter. “Once we were there, we filled up four dumpsters. We didn’t realize how much work there was to do, and we ended up needing another 40-yard container from the county.”

The five-member team cleared the area that was most affected by debris, but still have a little more work to do. Several pieces were too large to carry away, and have to be broken down with a chainsaw, and there’s still lingering debris in neighboring areas, although not as severe.

“We cleaned up the epicenter of the debris, and in Waves and Salvo, it’s more sporadic – the debris is more spread out,” said Carpenter. “There’s another two miles of area to cover, but there’s definitely not as much debris as there was in the campground area.”

Volunteer clean-ups by Chicamacomico Banks Fire & Rescue are frequent and have been occurring for years, but they are generally orchestrated after storms or major events, when a visible need arises. As an example, when a porch collapsed in the summer of 2018, and littered the shoreline with potentially dangerous materials, the volunteers were hard at work clearing the beaches to protect the waves of seasonal visitors.

“We take the initiative and start cleaning,” said Carpenter. “We want to keep our visitors and our local kids safe.”

Carpenter notes that beachgoers in the area can help with their efforts by collecting and piling heavy debris up above the high tide line. “We ask people to put debris along the dune line, or close to the dunes. It makes it easier for us to pull up and pick up the debris,” he said.

There may be a little more work remaining, as well as future storms to contend with. But with more than four dumpsters already filled with storm-related debris, the volunteer clean-up crew of Chicamacomico Banks Fire & Rescue has already taken a big step towards making the Rodanthe shoreline a cleaner, safer place to visit. 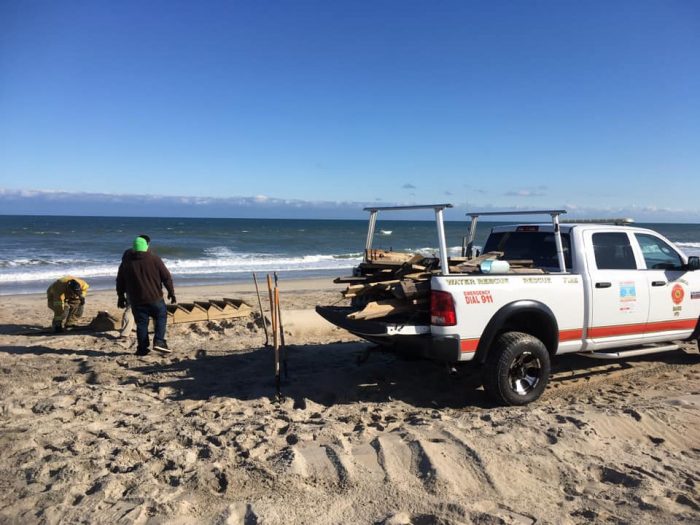