During the pandemic winter of 2021, the interior of the Buxton Village Books building underwent a transformation. I had been planning all of these projects for many years. In 1984, when I opened Buxton Village Books, the original 1860 building was two rooms, two porches, and a galley kitchen. Over the years, I’ve added several rooms until today we have eight rooms and a front porch.

But long before I occupied the building, many layers of remodeling had taken place. As we began the process of planning the revitalization of the building, we aimed to peel back all the layers to reveal any of the original, 1860 structure that remained. Our goal was to not create a museum, but to preserve and showcase whatever history we found, and also make the building functional and comfortable for contemporary use. We were astounded to find so much original material intact. This is the story of the building as we know it.

(If we’ve gotten any of the history wrong, or if anyone has knowledge or pictures we’ve missed, please reach out to us. We’d love to fill in the blanks.)

Down in Hatteras Village where the Marlin Club now sits, (probably right about where the pool is), back in the mid-1800s, the property was owned by the Oden family.

Hop forward to sometime in 1960s, when someone had the idea to float Miss Victoria Oden Gray’s kitchen up the shoreside of Pamlico Sound and place it in Buxton where it sits today. The Buxton property at that time was owned by a man from Pennsylvania, Morgan Morrow. That corner next to the old Buxton Landing path had been in the Jennette family for generations before Mr. Morrow purchased it. Today it’s in the ownership of me, Gee Gee Rosell, and has been the home of Buxton Village Books since 1984.

So what exactly did we do during this recent renovation?

As in many building projects, the big, expensive work is not visible. Our overall plan, which we hope was achieved, was to honor this history of this beautiful and important building, and strengthen it to work for many more years as a welcoming, comfortable retail space.

We put down bamboo floors.

When this building was built, floors had to withstand tide so there were no layers involved. Remember, it was originally on relatively low ground down in Hatteras Village. On the ridge where it sits today, we don’t have a worry about tide, and the original floor is still intact under the bamboo. But without any sub-anything, it just would not stand up to today’s foot traffic. So we sheathed it with marine plywood, and then floated the bamboo on top. We chose bamboo because it is the most earth-friendly flooring, and it’s tough as nails.

We also off layers of paneling and sheetrock that had been applied over the years before I occupied the building.

Under all that earlier remodeling, we found all the original beadboard wall, mostly painted Victorian pink or green. Because that Victorian paint had no health and safety requirements, we decided to paint over it in a bright exterior white. We did leave one walls green, and sealed it with clear coat. You’ll find that next to the shelves of Hardback Bestsellers.

We have written “stories” that we framed in slender black frames and have hung around the store, pointing out some of the interesting original features. Look for them when you’re in next time!

We vaulted the ceilings.

The original ceiling beams are now exposed, and are made from shipwreck timbers. When this building was constructed, the easiest way to get lumber was to drag the remains of a wrecked ship off the beach. The entire original building was framed with this flotsam.

It’s fascinating to think of where some of these timbers might have originated. Before the 1860s. ships from around the world sailed past the Outer Banks. Known as the Graveyard of the Atlantic, many of those ships foundered and sank on our island beaches. These ships could have had home ports in Spain, the Caribbean, or Europe. Some, of course, hailed from the Eastern North American seaboard.

The bead on the ceilings is contemporary. We saved every original bead board we pulled off the ceiling, cleaned them with an enzyme spray, and used some of them to repair damage we found in the other original walls.

When we pulled the original bead board ceiling down, we found the original dark green window shutters stored in the attic! We will restore those and replicate them for our exterior. 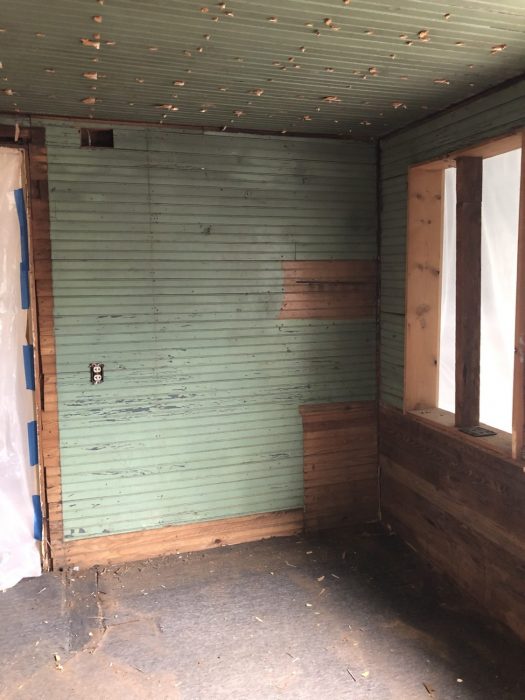 We installed a new heating and cooling system. This allowed us to pull the window AC units out and let the light flow in.

Once we got all the structural pieces completed, we refurbished the shelving and reinstalled it.

Everything had been customized to fit the space, and over the years, our customers let us know which subjects they wanted to find where. We did not change the basic layout, because it already worked quite well. The Young Adults wanted a room of their own, as did the Contemporary Fiction readers. The Outer Banks books needed to stay up by the check-out counter, because those shoppers have lots of questions. Readers of Adventure and Outdoor books liked the corner to themselves for lengthy browsing. And, of course, the Sea Bags are still hung in easy-to-reach places in every room.

We do hope you like what we’ve done. Our building is still the vintage treasure it always was, but now it’s light, bright, and airy, and we are looking forward to another 37 years of bookselling!