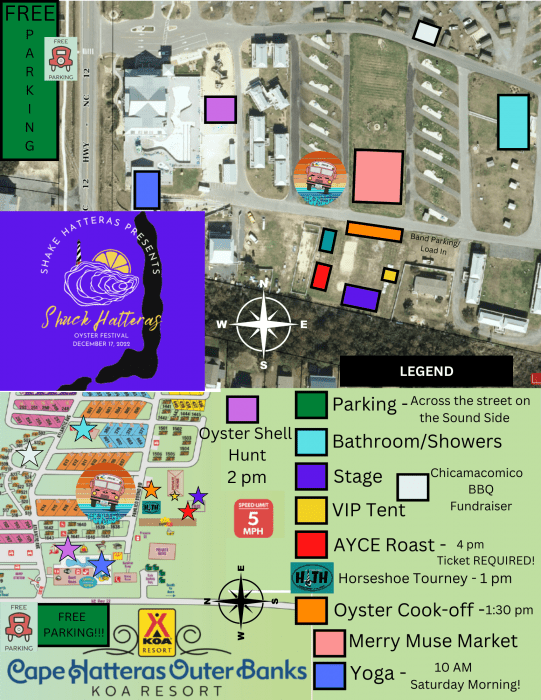 The first-ever Shuck Hatteras Music Festival is just hours away, and the inaugural event has already garnered tons of interest and support from the island community.

Held at the Cape Hatteras/Outer Banks KOA Resort in Rodanthe, the sprawling site will feature free parking at an adjacent soundside lot, a ticket booth, a Merry Muse Market, a stage for multiple bands, and different locales where all the oyster-themed action will take place.

The festivities kick off on Friday, December 16, at the Cape Hatteras/Outer Banks KOA Resort with live music by local band The Yacht Dogs, and local delicacies by Cousin’s Oysters, from 5:00 p.m. to 9:00 p.m.

The activity heats up on Saturday, December 17, starting at 1:00 p.m. with a Merry Muse Market featuring more than 25 local art vendors, which will be open all day long. 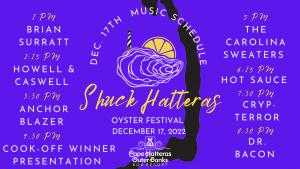 The Oyster Cook-Off Challenge is turning out to be one of the most anticipated events of the shellebration, with a total of 11 chefs entered in the competition, which will run from 1:30 p.m. to 3:30 p.m.

Tasting tickets for the Oyster Cook-Off Challenge will be available at the official Shuck Hatteras Booth on the premises, and there are three categories of awards, which will ultimately be decided by the tasters themselves: Best Tasting Oyster, People’s Choice Award (for booth set-up/presentation), and Most Creative Oyster.

At 4:00 p.m., the all-you-can-eat Oyster Roast begins, and while the overall festival is free and open to the public all day long, tickets can be purchased in advance for the Oyster Roast on site, or at the following locations:

The Chicamacomico Lifesaving Station will also be on-site serving BBQ, with all proceeds benefitting the local Rodanthe landmark, and the event will feature a wealth of other activities, such as free henna tattoos from HennaVibe Tattoo, a 50/50 raffle, horseshoe tournament, kids’ games, and much more.

With so many activities scheduled throughout the afternoon, (and lots of excitement along the way), the first-ever Shuck Hatteras Music Festival is shaping up to be one of the biggest events of the off-season, and per organizers, will easily be a new festival that returns year after year.