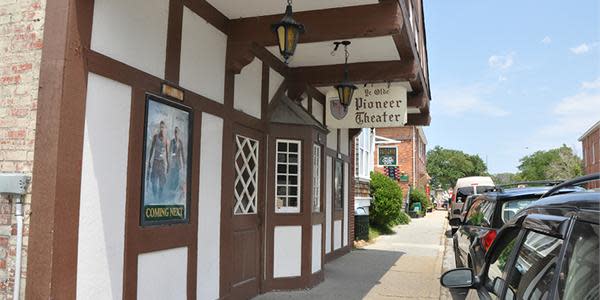 After more than a century, the lights may have dimmed for the final time at The Pioneer Theatre in downtown Manteo.

The movie house has stood on Budleigh Street since 1934, after first being located on what is now Sir Walter Raleigh Street when it first opened in 1918, and has weathered everything from storms and floods to a pair of global pandemics.

Along with being the site of many an Outer Banks native’s first cinematic experience, it’s been the scene of multiple premieres and special screenings.

That includes the East Coast opening in 1957 of A Face In the Crowd starring Andy Griffith, the award-winning, history making Peanut Butter Falcon in 2019 that was co-written by Colington’s own Tyler Nilson, and last spring the debut of the documentary “Hines” that tells the life story of Jesse Hines, pro surfer turned Outer Banks fro-yo shop Surfin’ Spoon co-owner.

When the COVID-19 pandemic shut down movie theaters across the country, the Creef family that has owned the Pioneer since its inception continued to crank out popcorn and drinks to take home.

Just after being allowed to reopen, the digital projector system broke down. At a cost of around $10,000, things looked hopeless for the Pioneer.

As has happened so often when adversity has struck, the Outer Banks-loving local and worldwide community stepped up to support one of our own, raising more than enough money to get the projector fixed and The Pioneer was back up and running in early 2021.

But after having a part of the projection system fail and repaired in August, that same part broke again last month and the screen has been dark ever since.

Then came the news on The Pioneer Theatre’s Facebook page Tuesday night from the Creef family that they will not be reopening:

This decision has not been made lightly, and has been something that has been coming for a long period of time, as we have watched decreasing attendance, increasing expenses, and changes in the theater industry over the years, all of which have contributed to ever increasing yearly financial losses.

We feel greatly honored and proud to have been an integral part of such a wonderful community over the last 104 years, serving and providing entertainment and “babysitting” services to many generations.

We would like to thank all of you who have supported us so much over all of these years, especially those who have been our core faithful and loyal customers week after week, year after year. We have enjoyed watching so many of you grow up, and then bring the next generation and introduce them to our popcorn world.

We consider all of you a part of our family and Love you very much. Hopefully, all of you, as part of our popcorn family, understand how hard this decision was for us and respect how much this saddens us.

With Love and Sadness,
Tim, Lizann, and Buddy Creef

The curtain appears to have dropped one last time at Ye Olde Pioneer Theatre, for now anyway. But as has so often happened in the long history of cinema, we can only hope for a happy ending.