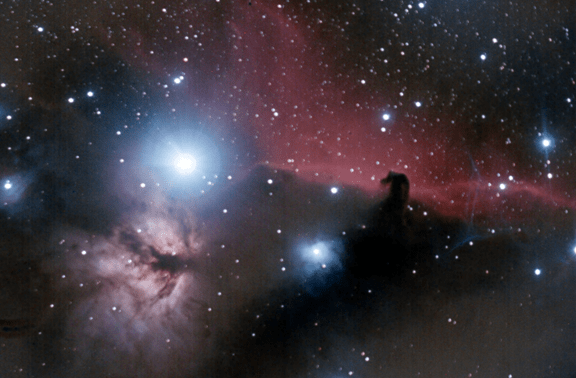 The Orion Constellation is very well known for its famous Orion Nebula (M42), but there are other fantastic nebulae in Orion. Two of the most popular ones are the Flame Nebula (NGC 2024) and Horsehead Nebula (Barnard 33).

Both of these nebulae are actually composed of two distinct objects. In each case, there is an emission nebula that is partially blocked by a dark cloud of dust. The Horsehead nebula refers to the dark nebula that obscures a portion of bright emission nebula, IC 434. On the other hand, the Flame Nebula refers to the bright emission nebula, NGC 2024, which is partially blocked by an unnamed dark cloud of dust. Both NGC 2024 and IC 434 are about 1,500 light years away from us. The Horsehead Nebula is about 1,375 light years away from us.

NGC 2024 has an apparent magnitude of +10, while IC 434’s magnitude is +7.3. Dark nebula like Barnard 33 are not assigned a magnitude, because they don’t have any brightness.

The bright star that appears just above the Flame Nebula is Alnitak. It is the left-most star in Orion’s belt, and has a visual magnitude of +1.7. It is only 740 light years from us.

There’s also a very pretty reflection nebula just below and to the left of the Horsehead. This is NGC 2023. Its apparent magnitude is +10 and it is 1,500 light years away from us. It reflects the light of HD 37903, the star that appears to be in the center of the nebula. HD 37903 has an apparent magnitude of +7.8. It’s about 970 light years from us.

What You Won’t See in February’s Night Skies

I can’t remember the last article where I didn’t mention Jupiter, Saturn, and Mars, visible at some point in the evening skies. Well, things have changed! The two gas giants, Jupiter and Saturn, won’t be visible in the evening skies again until August.

The evening skies will feature Mars, Uranus, and Neptune. Mars will start the month about 70° above the SSW horizon. If the night is very clear, you might be able to spot Uranus slightly to the west and below Mars. With a visual magnitude of +5.8, it is tough to see with the naked eye. Neptune will be about 20° above the WSW horizon. It has a visual magnitude of +7.8, so you will need a pair of binoculars to see it!

If conditions are right, you might be able to see Saturn, Mercury, and Jupiter in the early morning just before sunrise during the second half of the month. They will all be very close to the horizon, and there’s a good chance they will be obscured by morning clouds. So go out on the beach to take in the sunrise and, with a little luck, you might see a planet or two.

There are no major meteor showers in February.