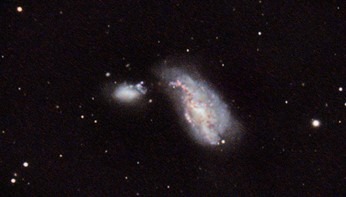 These galaxies collided with each other several million years ago. The encounter of the two galaxies distorted their shape and appears to have started a large amount of star creation in both. The blue colors indicate huge numbers of young, blue stars.

Another example of galactic collision can be seen in this image of  M51 and the much smaller NGC 5195 (also known as M51b). 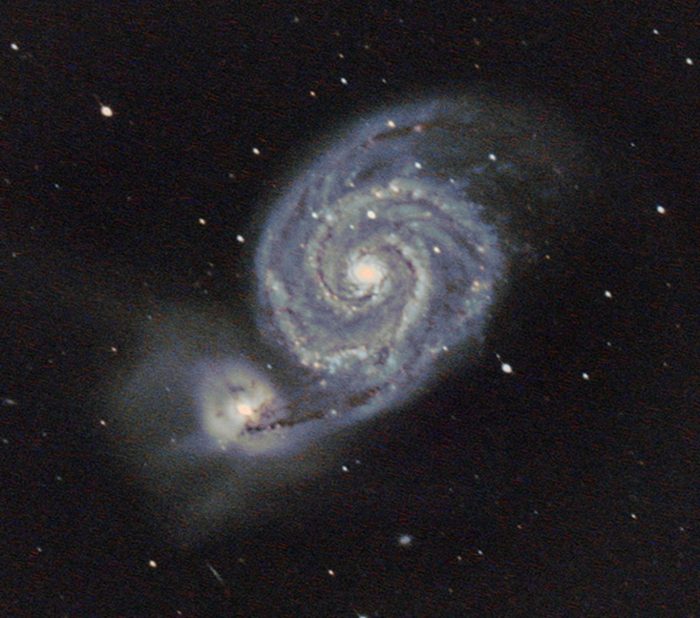 It’s believed that M51b collided with M51 about 500 million years ago. They still seem to be bound together as evidenced by the bridge of stars between the two.  Some astrophysicists believe the two are slowly merging together. The collision of the two appears to have sparked a significant amount of star formation as evidenced by the large area of blue stars.  Remember blue stars burn out in about 10 million years!

What you can  look for in April’s Night Skies

Uranus continues as the only planet in the evening night skies.  With a visual magnitude of +5.8, it is very difficult to see without a telescope or good pair of binoculars.  Look for Uranus about 20° above the western horizon right after dusk.

The early morning skies will be much more interesting.  Mars, Saturn, and Venus all rise within ten minutes of each other.  Mars leads the way at 4:35 a.m., followed by Saturn at 4:43 a.m.,  and Venus at 4:45 a.m.   That means the three will appear to form a  fairly tight triangle. Then Jupiter will rise at 6:02 a.m. followed by Neptune five minutes later.  Don’t expect to see Neptune unless you have some very good binoculars.

The Lyrids meteor shower peaks on the night of April 21st.  The best viewing will be at 4 a.m.  The shooting stars will appear to originate about 70° above the Eastern Horizon very close to the bright star, Vega!