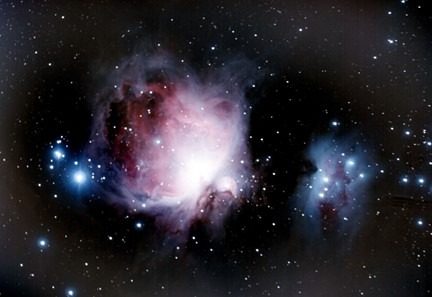 This picture actually contains three bright nebula. The largest and brightest is the Orion Nebula, M42. Its magnitude is +4.0, which means you can see it with your naked eye! M43 is the small circular nob, (near the center of the image), that appears to be part of M42. It has a magnitude of +9, making it much fainter than M42. There is quite a bit of controversy regarding whether or not M42 and M43 should be classified as a single nebula. I suspect that they are two distinct objects, since the Orion Nebula is about 1350 light years from us, while M43 is 1600 light years away.

Both M42 and M43 are areas of intense star creation.

Finally, the bright reflection nebular to the right of the picture is commonly called the Running Man Nebula. It is actually a group of 3 nebulae; NGC 1973, NGC 1975 and NGC 1977.

Venus continues as the “Morning Star!” With a visual magnitude of -4.2, you won’t confuse it with anything else. Look for Venus to rise over the ocean at 4:38 a.m. on December 1.

Mercury will also be visible in the eastern, morning skies. This smallest planet rises at 6:04 a.m. on December 1. That’s almost 50 minutes before sunrise, making it fairly easy to spot before the horizon gets to light.

If you’re out on the beach checking out Venus and Mercury, and just happen to have a telescope handy, you might want to look for comet C/2020 S3, Erasmus. It’s magnitude +11.3, so you can’t see it with the naked eye. It will be about 11º above the eastern horizon at 6:00 a.m. – just a little south of the line between Venus and Mercury.

The evening skies still feature Pluto, Jupiter, Saturn, Neptune, Mars, and Uranus, (in that order going west to east). Jupiter and Saturn will very close together, about 20° above the SW horizon. Saturn will be slightly above and east of Jupiter. Mars will start the month about 40º above the eastern horizon. If the night is very clear, you might be able to spot Uranus slightly below and to the east of Mars.

Jupiter and Saturn will appear to grow closer and closer as the month progresses. (Remember, their proximity is an illusion, as the distance between them is about 400 million miles). On December 21, they will appear to be right on top of each other. This is the “Great Conjunction of 2020.” The last Great Conjunction took place in May of 2000.

Best viewing of the Great Conjunction will be right after sundown. The “Double Planet” will be about 15º above the SW horizon. Both planets will set shortly after 7:00 p.m.

The Ursids meteor shower peaks on December 22. It’s considered a major shower, but has a habit of not living up to its name. You can expect to see about 10 shooting stars per hour. Best viewing is around 5:00 a.m. The Ursids are easy to locate – simply look north and find the Little Dipper!

The Quadranids meteor shower peaks on January 3, but it can be seen in the early morning hours of the last week of December. It has the potential for 120 meteorites per hour, and a fireball or two, but sometimes it only produces about 10 shooting stars per hour. The shooting stars appear to originate just east of the Big Dipper.

The Geminid meteor shower will peak on the night of December 13. This is a major shower with up to 120 shooting stars and fireballs per hour. If we have clear skies, the viewing conditions should be excellent. December 13 happens to be the night before the new moon, and the skies will be very dark! The action could start as early as 7:30 p.m. Simply look to the ENE and locate the twin stars Castor and Pollux – they really do look like a matched pair, and the meteorites will appear to originate from them. If some the shooting stars of the Geminid’s appear to move slowly, it’s because they’re literally trying to catch up to our planet as they enter the atmosphere.