September offers great views of Jupiter and Saturn, and you should be able to spot Saturn as soon as it gets dark on September 1. Look for it about 21° above the SE horizon. 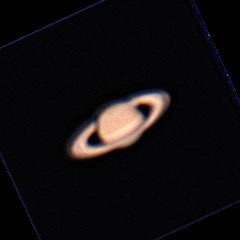 Saturn is the second-largest planet in our solar system and the sixth planet from the sun. It’s about 886 million miles from the sun. Its diameter is close to 72,000 miles. That makes Saturn about nine times wider than the earth. Saturn is almost entirely composed of hydrogen and helium and has a surface temperature of -290º F.

Saturn has 53 confirmed moons and 29 “provisional” moons. (A newly discovered object that appears to be orbiting a planet is designated provisional until further study confirms its orbit around the planet.) Saturn has a visual magnitude of +0.2, which makes it brighter than most of the stars in the night skies. 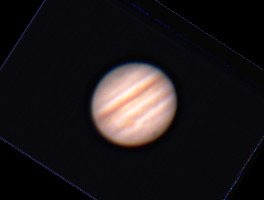 You should also be able to spot Jupiter. It’s a little lower in the skies than Saturn, but with a visual magnitude of -2.9, it will be pretty easy to spot. To the naked eye, Jupiter appears to be a very bright star. If you use a pair of binoculars, the planet is clearly defined and you should be able to spot Jupiter’s four large moons: Io, Europa, Ganymede, and Callisto. These four Galilean moons should be visible for most of the night on September 1!

Jupiter is the largest planet in our solar system. It’s the fifth planet from the Sun and about 484 million miles from it. Its diameter is close to 88,000 miles. That makes it about 11 times wider than the earth. It’s mainly composed of hydrogen and helium, and has a surface temperature of -160° F.

Jupiter’s day is only 10 hours long and it’s year is 12 earth years long.

Jupiter has 79 confirmed moons and an ever-changing number of “provisional” moons. In the image above, the light spot between Jupiter and the lower left corner is the moon, Io. It’s a little bit larger than our own moon. NASA’s Voyager 1 showed Io has about 400 active volcanoes, making it the most volcanically-active object in our solar system.

With a magnitude of -2.9, Jupiter is the third brightest object in the night skies. Only Venus and our moon are brighter. That also means it’s very easy to spot with the naked eye.

Saturn and Jupiter are not the only planets in the evening skies. On the western horizon, Venus and Mercury are visible right after sundown. Mercury will only be about 10° above the horizon, and sets at 8:25 p.m., so you have a pretty limited viewing period. But Venus begins the night about 20° above the horizon and doesn’t set until after 9:00 p.m. With a magnitude of -4.0, it’s the brightest object in the evening sky! (The moon doesn’t rise until 1:00 a.m.)

If you have very good binoculars or a telescope, Neptune rises in the east at 7:58 p.m.

While you’re out looking for Jupiter and Saturn, take the time to look at the southern skies. On a clear night, you’ll be able to see a very bright section of the Milky Way. This particular region is home to quite a few spectacular nebulae, including the Eagle Nebula, Omega Nebula, Trifid Nebula, and Lagoon Nebula. All of these nebulae have visual magnitudes above +6.0, so you will need a good pair of binoculars to see them. The bright section that lies in the center of them is called the Sagittarius Star Cloud. It has a visual magnitude of +4.6 and is number 24 in Messier’s list of things that you shouldn’t mistake for comets. There are about 1,000 stars in M24!