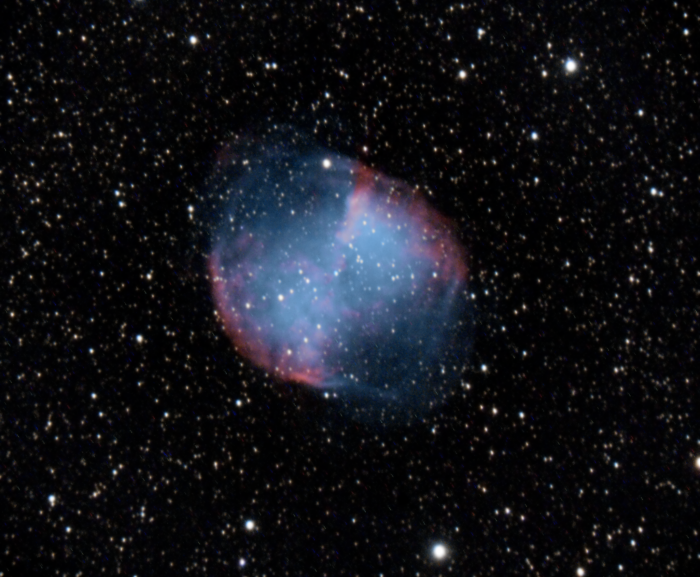 This is M27, the Dumbbell Nebula. First observed by Charles Messier in 1764, it was the first planetary nebula ever discovered. William Herschel coined the name “planetary nebula,” because M27 resembled his newly discovered planet, Uranus. Herschel’s son, John, thought it looked like a dumbbell.

M27 is 1,400 light years from us and has a visual magnitude of +7.5. That’s bright enough to easily see through a good pair of binoculars. But, finding it through binoculars might prove to be a little difficult. If you are up to the challenge, start by looking almost directly overhead for the Summer Triangle formed by three bright stars: Vega, Deneb, and Altair. M27 is about two-thirds of the way from Deneb to Altair, and slightly inside the triangle (towards Vega). 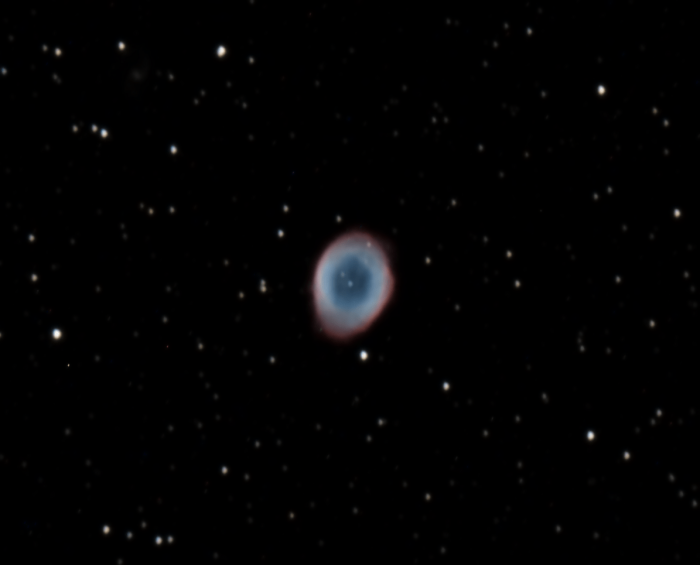 The Ring Nebula, M57, is another example of a planetary nebula. Like M27, it’s 1,400 light years away from us, but it’s a fairly small and much fainter nebula with a visual magnitude of +8.8. M57 was first discovered by Antoine Darquier de Pellepoix in 1779. Messier discovered it, (before he heard of Pellepoix’s discovery), a short time later, and entered it in his list of things that are not comets!

Venus continues as the “Morning Star!” With a visual magnitude of -4.2, you won’t confuse it with anything else.

The evening skies still feature Jupiter, Saturn and Mars. Both Jupiter and Saturn rise before sunset. Just after sunset on September 1, Jupiter will be about 30° above the SE horizon. Saturn will follow slightly behind Jupiter, and the nearly full moon will lag behind the two planets. Mars rises at 9:42 p.m.