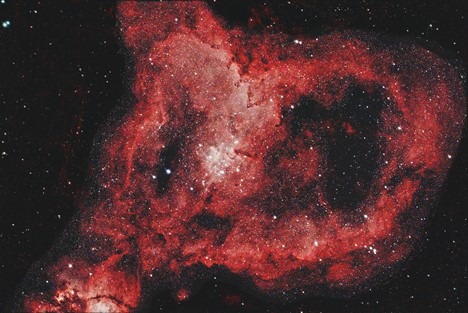 It’s about 7,500 light years away from us and has a visual magnitude of +6.5. The Heart Nebula is located near the constellation Cassiopeia. It’s pretty hard to see this massive nebula through a telescope, but you can easily see the cluster of bright stars in its center. These stars are believed to be the reason why so much of the surrounding hydrogen gas has ionized, giving us this beautiful nebula.

The distinctive shape of IC 1805 gave it the name Heart Nebula. There’s another large emission nebula right next to it that’s called the Soul Nebula. 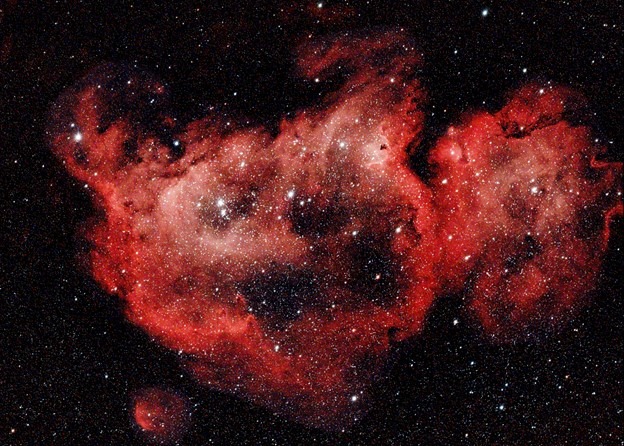 Obviously, somebody really wanted a little Heart and Soul in the skies. Or somebody had a very strange idea about what a soul looks like! The Soul Nebula is often classified as IC1848, but that catalog number actually refers to the open star cluster that’s surrounded by this nebula. The stars cause the surrounding gases to ionize, resulting in this emission nebula. The Soul Nebula has the same visual magnitude as the Heart Nebula (+6.5), but it’s about 1,000 light years closes (6.5 light years).

Look for Venus to appear in the southwest as the skies get dark on December 1. Saturn, Jupiter, Neptune, and Uranus follow behind Venus, (going west to east.)

Look for the Pleiades in the east right after dark. It’s fun to take your kids out and see how good their eyes are by asking them how many stars they can see in this small open cluster. Normally, I can see five stars without much problem. On a clear night, I sometimes see six, but I remember seeing seven stars when I was 20!

19P/Borrelly is a +9.2 magnitude comet that will be about 16° above the southern horizon at 6:00 p.m. on December 1. You’re going to need a telescope or very good binoculars, and very clear skies, to see it.

The Geminids meteor shower will peak on the night of December 14. This is the biggest meteor shower of the year. You can expect up to 120 shooting stars per hour.

You might be able to see Geminids activity from December 1 until the 24. Best viewing will be between midnight and 5:00 a.m., but you might see some activity as early as 8:00 p.m. The shooting stars will appear to emanate from the constellation Gemini. Look for the twin stars Castor and Pollux to rise in the ENE just after 7:00 p.m.

The Ursids meteor shower will peak on the night of December 22. Don’t hold your breath waiting for this one. The Ursids are a pretty weak shower, and the waning full moon will probably wash out most of the meteor activity. But, they are easy to find. Simply look for the Little Dipper!

The Quadrantids peak on January 3, but you might be able to see some activity during the last week of December. This meteor shower can be as strong as the Geminids, offering as many as 120 shooting stars per hour. They will appear to originate just below the Big Dipper. Best viewing is around 5:00 a.m.