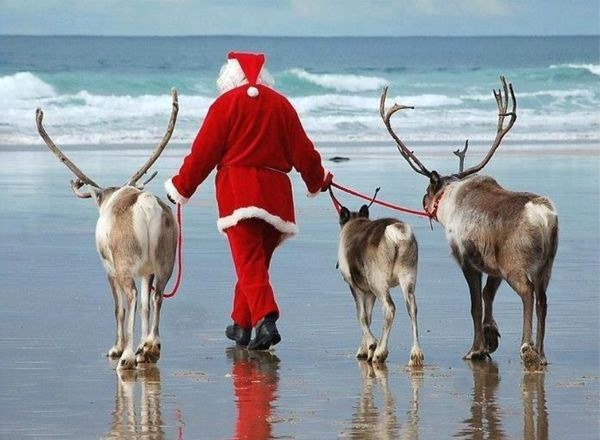 With a nod to Major Henry Livingston, Jr. who wrote the Original Version

‘Twas the night before Christmas, and all over the isle,

Not a creature was stirring, mile after mile.

The ghost crabs were snug in their holes on the beach,

Hoping that the high tides would stay out of reach.

The surfers were nestled all snug in their beds,

While visions of gnarly swells danced in their heads.

The crab-pots were hung by the buoys with care,

In hopes that some blue claws soon would be there.

When out on the Point there arose such a clatter,

The Park Service sprang up to see what was the matter.

Away to their vehicles they ran with their lamps,

And began an ascent on all open ramps.

The moon on the sand made quite a reflection,

While waves were crashing in every direction.

When what to their wondering eyes should appear,

But a tricked out 4 by 4 and eight island deer.

With a little old driver hunkered down in the truck,

They knew in a moment it must be Old Buck!

More rapid than kite boarders the deer hurried along,

And he whistled and shouted and sang them a song.

On Rodanthe, on Waves, on Hatteras – let’s disco!

To the edge of the Point, to the top of the Light,

Let’s have a great time and party all night!

And like dry leaves before a nor’easter did fly,

They hit Highway 12 and continued on by.

He was dressed in a wetsuit from his head to his feet,

And he smelled like Skeeter Beater with a hint of DEET.

A bundle of seashells he had in his pack,

And a bottle of Kill Devil Rum in a sack.

He spoke not a word but took special care,

To bring a gift to the island and all who live there.

It had been a tough year, this the old man did know,

So his gift was one that didn’t require a bow.

He sprang to his truck and laid on the horn,

To make sure everyone knew it would soon be Christmas morn.

And we heard him exclaim as he drove out of sight,

NO MORE COVID, NO MORE OVERWASH, LOTS OF FISH,

And to all, a good night!

*Old Buck mentioned in this poem is a fixture of the “Old Christmas” celebrations still held in Rodanthe. Old Buck is a part of the fabric of the island.

Written by Janet Morrow Dawson, Buxton NC, 2016 and revised as needed each year!