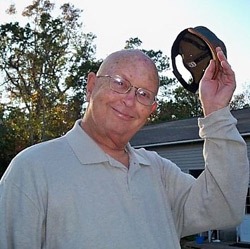 He graduated with a Bachelor of Science from Clemson University in 1963 and received his Master’s in Education from Old Dominion University.  During his time at Clemson, he was in the ROTC and after graduation joined the United States Army as a Lieutenant. Having served his country honorably, Algie left the Army in 1966 and worked for Jostens as a yearbook editor.

Following his position at Jostens, he spent the rest of his career as a teacher and coach in both Virginia and North Carolina. This career began as a teacher and wrestling coach at Poquoson High School.  He left Poquoson to become an assistant principal in Hampton, VA.  In 1981, he left Hampton to become a teacher at Manteo High School where he taught industrial cooperative training (ICT) and marine occupations.  Besides teaching, he held multiple roles throughout his career at Manteo High School.  He was Athletic Director, wrestling, football, golf, and cheerleading coach.  Algie retired from teaching in 2007.

After retirement, he continued as the cheerleading coach until his health would no longer allow him too. Teaching, coaching, and his students gave him joy and purpose throughout his career.

On the morning of May 27, 2020, he left this world to be with his Lord and Savior Jesus Christ.  He is survived and deeply loved by his wife Marilyn and three sons and their wives, Rusty and Tina, Michael and Regina, and Robbie and Sissy; and grandchildren Robbie, Bailey, and Casey. He will be sorely missed.