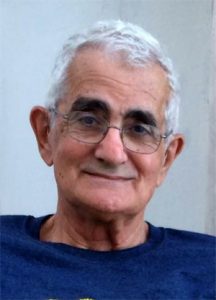 SOUTHERN SHORES — Andrew Vasilakis, 84, died on May 30, 2021, at his home in Southern Shores, NC. He was preceded in death only 13 days earlier by his wife of 57 years, Marilyn. His parents, Kyparisia and Emanuel, and his sister and brother, Laula Constantine and Costas Vasilakis also preceded him in death.

Andrew was born and raised in New York City, and after serving in the Army, lived most of his life in New York and New Jersey until moving to Southern Shores, NC in 1992. Andrew led a life full of activity; fishing, crabbing, bowling, poker, golfing, camping, biking, chopping wood, running, hunting, and gardening. His two greatest joys in life were hunting and running, and his closest friendships were forged within those pursuits. He was proud of the many races he ran, which included the Marine Corps, Jersey Shore, and Dartmouth marathons. He was often recognized as “the Duck runner” when he first moved to the Outer Banks. He also loved spending time at his cabin in the Catskills with his hunting camp crew.

Along with many dear friends, he leaves behind his daughters, Diana Vasilakis (Mark Cross) of Ellicott City MD, Kristine Vasilakis of Millstone NJ, and Nicki Vasilakis of South Amboy, NJ; and his beloved grandchildren, Caleb Cross and Natalie Cross. They will all miss him terribly.

The family plans to hold a private service at a later date.