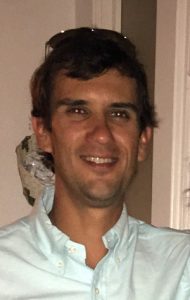 Born in Denver, CO on September 15, 1982, he was the son of Beverly Koops Jones of Kill Devil Hills, NC and the late Spencer Jones.

While earning his degree from Texas Wesleyan University, Ash was able to pursue his passion by playing for the Rams Golf Team for 4 years. He served as the PGA professional for several golf courses, locally The Pointe. He was also the founder and former owner and operator of Turf’s Up OBX. In addition to passion for golf was his passion for flying. Ash was proud to mention he obtained his pilot’s license before his driver’s license. Always with a smile on his face, the most important thing in his life was family. Ash took great pride in coaching his sons’ baseball teams.

In keeping with Ash’s wishes, there will be no service. A celebration of his life will be announced in the future.

Twiford Funeral Home, Manteo, NC is assisting the family with arrangements. Condolences and memories can be shared at www.TwifordFH.com.