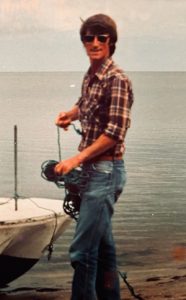 AVON — Bannister Boyd Gray or “BB” as he was best known passed away on September 3, 2021. BB was a Dare County native- born and raised in the village of Kinnakeet. He was the loving son of the late Seymour R. and Sara M. Gray.  BB joins in Heaven, eight brothers and sisters: Marceline, Goldia, Garnet, Phyllis, Edith, Cathy, Carolyn, and Robert.

For many years, BB was a familiar face in the isles of Charles Williams’ store. Before that, he made his living on the water.  In addition to fishing, he also had a passion and talent for gardening.  He was quick to share the bounty of his garden with anyone he met. BB will be remembered for his generosity, big heart, kind smile, and jovial laugh.

The funeral service will be held outdoors at BB’s house in Avon on Tuesday, September 7, 2021, at 2 pm. Reverend Gina Miller will officiate. The interment will be private. In lieu of flowers the family gratefully suggests a donation to the Cape Hatteras Methodist Men in BB’s honor.

Condolences may be expressed at www.gallopfuneralservices.com. Gallop Funeral Services, Inc. was entrusted with arrangements.