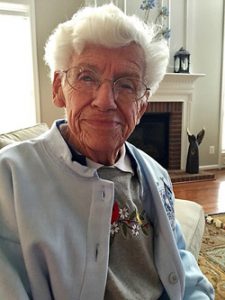 She was born February 23, 1930 in NW Washington DC, the daughter of the late Charles S. and Helen Omohundro. After raising her family and working for Montgomery Country Public Schools, MD,  Beverley moved full-time to her paradise, Hatteras Island, NC, where she spent the remainder of her life.

She was a treasure, and captured the joy in every moment; a sports enthusiast, playing for the 1960s ladies softball league, “The U.S. State Department Blue Diamonds,” and avid angler with the  “Rod Runners.” She loved her life, was a prideful community member of Hatteras Island, and most of all, cherished her family.

She is preceded in death by her siblings; Shirley O. Cooley and Charles S. Omohundro, Jr.

In lieu of flowers, donations can be made to the Outer Banks Relief Foundation, 103 East 8th St. Nags Head, NC 27969.