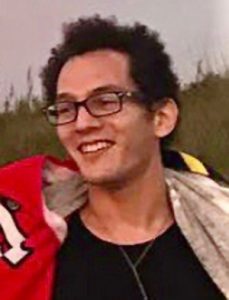 Caleb was born on April 5, 1992, in Norfolk, Virginia to April Holland and Charles Grant. He is survived by his devoted mother and brother, April and Jacob Holland, who reside in Kitty Hawk, and by his father, Charles Grant, of Virginia Beach, along with a host of relatives and loving friends.

Caleb grew up on the beautiful barrier islands of the Outer Banks of North Carolina. He graduated from First Flight High School, where he acquired his love of the culinary life. He began his career at Food Dudes, researching organic farming practices and preparing inventive organic menus for his senior project while shadowing Jay and Shawn.

Following his graduation, Caleb continued to hone his skills at restaurants throughout the Outer Banks and Norfolk, finally landing at Bad Bean where he found his second family.

Caleb was universally beloved for his kind spirit and positive soul. He was the brightest star we ever knew. Please join Caleb’s family and friends as we celebrate his life on October 17, 2021 from 1pm to 3pm at Bad Bean Baja Grill on 4146 N Croatan Hwy in Kitty Hawk.

Please express condolences and love to the family via the online register at www.gallopfuneralservices.com. Gallop Funeral Services, Inc. was entrusted with arrangements.