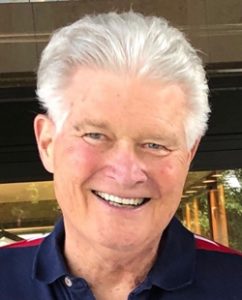 Dave Hilton’s courageous journey through two years of glioblastoma grade IV brain cancer ended peacefully at home in Kitty Hawk, N.C., recently. Having enjoyed life for 80 years, he finally won the battle over this horrific disease surrounded by his wife, family, and friends to claim his place in heaven.

As a Christian and family man, Dave is survived by his soulmate and loving, devoted wife, Lola Blackwell Kirsch Hilton, and by his three sons — David Hilton and wife, Amy, of Ocracoke Island; Michael Hilton and wife, Linda, of Hatteras Island; and Patrick Hilton and wife, Mary Helen, of Chesapeake, Va.; as well as by his step-daughter, Cynthia Blackwell, of Brooklyn, N.Y. All four children bonded as siblings.

His four grandsons were his pride and joy: Colin (born on his grandfather’s birthday) and Casey Hilton as well as Olivier and Jean-Michel Severin. Also remaining to treasure memories are his niece, Michele Hilton Bordinca; her husband, Dragas; and great nieces, Nina and Emme; as well as Aunts Geneva and Veneda Hilton, and Lutrell Smith; many first and second cousins; and his loyal Labradoodle, Cammie. He cherished Lola’s mom, Frances Roughton, her family, and devoted friends and neighbors. Dave was predeceased by his father—CDR Ernie Hilton, USN—and mother, Elnora; his brother, Tom; and his sister, Kay Kenneally.

Born in Jacksonville, Fla., on March 9, 1939, Dave graduated from Jacksonville University prior to entering the US Coast Guard Reserves and training as a military medic. He then applied and was accepted at Naval Officer Candidate School, Newport, R.I., and then Naval Supply Corps School, Athens, Ga., where he received integrated education and training while building personal, professional and leadership competence to meet current and future global defense challenges.

The rest of his Naval career would see two tours of duty with his family to Keflavik, Iceland, and three ship assignments as Supply/Procurement Officer aboard USS Pawcatuck (AO-108), USS Josephus Daniels (CG-27), and the aircraft carrier USS John F. Kennedy (CV-67), where he was promoted to Navy Captain and assigned as Commanding Officer of Navy Material Transportation Office, Norfolk, Va. His last active-duty station was Supply Officer, Naval Aviation Technical Center, Naval Air Station, Patuxent River, Md. During his 27-year military career, he earned numerous decorations, medals, badges, and campaign ribbons including the prestigious Legion of Merit with One Star.

His love of his Lord and Country led to membership in many other community service organizations, including US Coast Guard Auxiliary Flotilla 1607, where he served as Operations Officer, then as Flotilla Commander, and spent many hours on the Albemarle Sound as coxswain on his personal vessel, Docksology, while supporting the active-duty Coast Guard on training missions.

Dave and his family express sincere gratitude to the hundreds of loving people who joined Team Hilton to provide love, prayer, cards, comfort, and food during his illness, most especially to Kitty Hawk United Methodist Church, Dare County Home Health Hospice, and many professionals in conventional and integrative medicine.

Gallop Funeral Services, Inc. has been entrusted with arrangements. In lieu of flowers, donations may be made to Kitty Hawk United Methodist Church. Condolences may be expressed via the online registry at www.gallopfuneralservices.com.