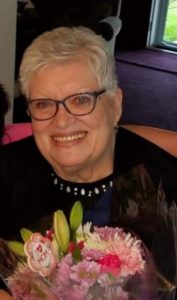 On July 7, 2020 Carole Howell was called “Home”. Carole would be turning 80 this July. She was born in Hatteras N.C. and settled in Philadelphia around 8 years of age.

She lived a full life as a devoted daughter to Charles and Murrell (Austin) Howell and beloved sister to Wendell and Vernell Dorner. She held a warm place in her heart of love and loyalty for her nieces, Gillian, Hillary and great niece Zora. She was blessed to have a son, Perry Allen Cabrera and later in life becoming the grandmother to Matthew Allen Cabrera. Two people that she loved more than anyone in the world. She was so proud of her family.

Although, Matthew was her only blood grandchild, she was known to all as Grandma Carole. Loved by all of Matthew’s cousin’s, Jaclynn, Michelle, Michael, Marc, Samantha, Monica, John, Dan, Phil; and great-grands, Kinsley and Jackson. She shared her time and love with these children and created a lot of memories that will be cherished. Carole was an awesome friend to whomever needed her. She was the first to lend a supportive hand or ear to anyone that needed her. She was so grateful to friends at Gloria Dei Manor that returned the same level of friendship to her over the years.

Perry may have been an only child but that was only until he married Francine (Giovanetti). He became the brother to MaryAnn (Cis), Michael, John and their spouses, Jack, Diane and Jennifer. This family is strong in love, rooted in values and blessed by the Grace of God. We are humble and know the true meaning of family.

We will keep her memories close in our hearts and will continue traditions that will honor her memory.

Until we meet again, rest well, soar high and watch over us!

Twiford’s Funeral Parlor will bury Carole’s ashes by her mother’s vault in the family cemetery on Hatteras. In life, they were inseparable