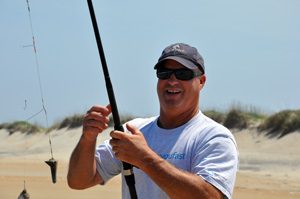 Ward Moore was a good friend to many. Known for his infectious smile, captivating blue eyes, and laid-back demeanor, he loved life to its fullest and it loved him back. Ward grew up in a large family in Virginia Beach, graduating from Cox High School. He was well known as one of the “Moore boys”, a formidable and popular group of siblings who excelled at everything they set out to do.

Tiring of the commercialism and the hustle and bustle of Virginia Beach, Ward longed for a simpler life and it didn’t take long for him and his brothers to make their way to the Outer Banks to stake their claim on the growing building industry that would shape it into what it is today. Driving down the bypass or beach road, Ward’s contribution to the landscape is everywhere as his handy work is visible in the many houses, decks, or beach walkways he has renovated or built over the years.

Not long after moving to Nags Head, a girl from Moyock caught Ward’s eye. The attraction was instantaneous for both, and in a very short period he fell in love with Debbie Ferrell and together they spent 29 years building a wonderful life together, raising their beautiful daughter Mollie in Nags Head. In addition to being the most wonderful husband to Debbie, Ward was also a great father who was so proud of his Mollie. His face would light up at the mention of her name.

Ward was the proud owner of Willy, his Chesapeake Bay Retriever who would join the guys in the surf. Willy was a bit of a legend and is featured in Vic Berg’s book entitled “My Life Pile”.

Ward was the type of guy you would want to be around – very animated, a great joke and storyteller and someone who could light up the room with his big smile and personality. A true outdoorsman he loved surfing, fishing, and the game of golf. He loved nothing more than planning surf trips to locations like Ecuador, Puerto Escondido, and Nicaragua – always on the hunt for the biggest waves.

If you were lucky to meet Ward, you were truly blessed as he was one of the most genuinely authentic persons who loved life and lived it to its fullest. The Outer Banks lost a piece of its soul when Ward passed, and heaven just gained a wonderful new angel.

The family will receive friends and relatives for a viewing and visitation Wednesday, August 19, 2020, at Twiford Colony Chapel, Manteo from 6:00 until 8:00 pm. A graveside committal service will be held at 1:00 pm on Thursday, August 20, 2020, at Moyock Memorial Cemetery.

A private family funeral will be held at St. Andrews By-the-Sea Episcopal Church, where Ward and Debbie are members.

A celebration of Ward’s life will be held at a later date.