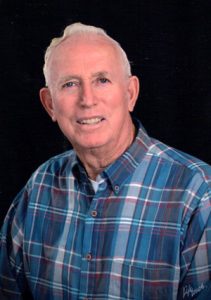 Ervin Lee was born on February 7, 1940 in Hatteras’ “Sticky Bottom”. He lived the typical life of a Hatteras boy spending most of his time at the docks or on the water. He worked at Mr. Harold Midgett’s garage as a teenager, sometimes driving to the city for parts. He enlisted in the Air Force on January 22, 1960 with his buddies, Shankie Peele and Roy Tandy. He met his wife, Linda, in February 1964 while stationed at Charleston AFB and they wed on June 23, 1964 in Kingstree, SC. During his Air Force career, he was stationed at Kadena AFB, Okinawa; Randolph AFB, San Antonio, Texas; Andrews AFB, Camp Springs, MD; Clarke AFB, Philippines; Kunsan AFB, Korea; Pope AFB, Fayetteville, NC and Kirtland AFB, Albuquerque, New Mexico. He retired as a Senior Master Sergeant to his Hatteras home on July 31, 1980. After coming home, he began working with the NC Ferry System retiring once again on September 30, 2007 and returned to the NC Ferry System November 1, 2008 and retired again in the spring of 2017.  Always one to stay busy he worked for the ferry one week, the second week, he was crabbing or fishing or building. He enclosed the front porch of his home and built a shed for storage, shoveled many loads of sand while landscaping his home and made sure that his three girls had property for a home. He supported his wife in all her church and community work, and she attests she could not have done it without his support.