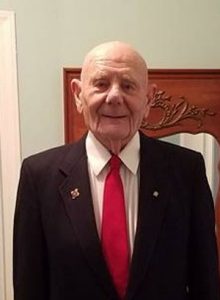 He attended St. Paul’s Lutheran church school in Paterson where his maternal Grandfather Louis Luecke taught. He then graduated from Paterson Eastside High School in 1939 and attended Paterson State Teachers College for 3 years. His college career was put on hold as he entered the service under the V-12 program attending Drew University and then Columbia University four months each to obtain his Navy commission. From 1943 to 1946 he served as a Lieutenant J.G. executive officer in the U.S. Navy and spent 2 years in the Pacific during World War 2 on LCI’s (Landing Craft Infantry). Fred saw action in the Philippines and during the battle of Leyte Gulf his LCI was severely damaged by a Japanese Kamikaze suicide bomber.

Following his discharge from the Navy he earned his bachelor’s degree from Montclair State, and later, his Master’s in Education. Frederick’s first teaching job in 1947 was at Garfield High School and then in 1948 at Tappan Zee High School and finally, at Westwood High school starting in 1949. Fred was a history teach for 40 years until his retirement in 1987.  He coached many sports on the Varsity and JV levels over the years, but his longest tenure was coaching varsity basketball at Westwood where his teams won over 100 games.

Fred met the love of his life at Paterson State in 1943, Ruth Simpson, then of Hawthorne, New Jersey. They married in New York City on April 20, 1944 and two weeks later Fred went off to war. In 1950 their first son Cort was born and the Engelken’s put down roots in Hillsdale settling in a new development of cape cods. A second son, Blair, came soon after in 1952. Their strong faith led them to join Zion Lutheran Church in Westwood. Fred and Ruth played an active role in the growth of the Church; particularly the starting of the Zion Lutheran School in 1961 and the forming of the Homebound Ministry group.

After Fred retired in 1987, they enjoyed traveling around the US and internationally, attending elder hostels. They enjoyed swimming several times a week at the YMCA, walking, reading and spending time with their grandchildren. Ruth, his bride of 74 years, passed away on May 13, 2018 and a week later Fred moved in with his son Blair of Southern Shores, Outer Banks of North Carolina.

Condolences to the family may be expressed via the online register at www.gallopfuneralservices.com. Gallop Funeral Services, Inc. was entrusted with local arrangements.