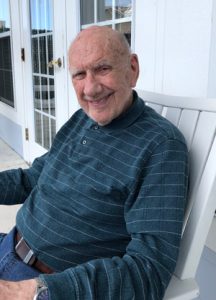 Frederick Mason Robison (born May 30, 1934) passed away Tuesday, May 25, 2021, on the Outer Banks of North Carolina.  He was the son of Katherine Mason Gerrard and Frederick Augustus Robison.  He was born in Danville, Illinois and attended the University of Illinois at Champaign.  There he met his wife of almost 60 years, Nancy Jane Potter.  He received both a CPA degree and a law degree from the University of Illinois.

Fred first worked for the Arthur Anderson CPA firm.  Then he worked for Warnaco, as assistant treasurer and treasurer for ten years.  Afterward, he worked as treasurer and vice president of Emery Air Freight for 11 years.  He briefly worked for Burlington Air Express.  His favorite job was working, for John Sebastian at Sebastian Cosmetics, as chief financial officer.

Fred attended the Congregational Church on the Monroe Green, where he served as a deacon.  After retirement, he moved to Dunn, North Carolina, where he was a member of the Dunn First Presbyterian Church for 23 years.