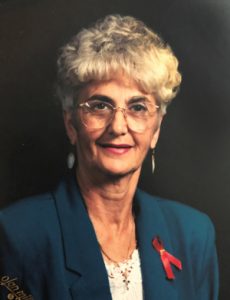 Born in Oceanside, NY on June 11, 1931, she was the daughter of the late Alice and Charles Moore Wallace.

Gloria was the widow of Captain Philip H. Ruhle and was preceded in death by three sons, Philip, Thomas, and Robert; a grandson, James; and four siblings, Walter, Budd, Charles, and Sandra.

She is survived by two sons, James Ruhle (Kathy) and William Ruhle (Beth Ann); and a daughter-in-law, Donna Ruhle. She was known as Granny to several grandchildren, great-grandchildren, numerous nieces and nephews including a special niece, Denise Goodale.

Gloria was a professional homemaker and made over twenty houses her home as her beloved husband Phil chased swordfish up and down the East Coast. Family was most important to Gloria and she was very proud of the one she had created.

Services are pending at this time.