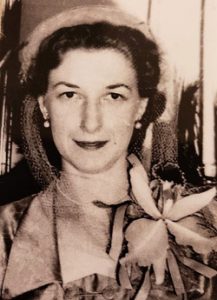 MANTEO — Jacqueline Vannote Midgett, 90, a resident of Peak Resources – Outer Banks in Nags Head, and formerly of Manteo, died Sunday, June 21, 2020. Born on July 28, 1929, she was the only child of the late James Vannote and Carrie Evans Vannote. She was raised in Manteo, NC and was a graduate of Manteo High School. Upon graduation, she attended King’s Business College in Raleigh. She was a life-long member of the Mount Olivet United Methodist Church.

Mrs. Midgett was the widow of Hatton Howard Midgett, Jr. She was a dedicated and loving wife for 59 years. In addition to her brother-in-law, Robert T. Midgett of Manteo, Mrs. Midgett is survived by one niece, Tammy Griggs Yachel and close family members Kathy and Carson Beasley, Steve and Lynn Midgett, Charles and Becky Evans and an “extended” family of caregivers who made it possible for her to stay at home for many years during a long illness: Cynthia Kolonji, Succelia Murphy, Edwin Jackson and Tanya Wescott. She is also survived by close friends Hughes and Janice Tillett, Gib and Pam Harrison, and Martha Worrell who were always there to help her when needed. In addition, the family sends a special thank you to the staff at Peak Resources where she resided for the last several years.

Mrs. Midgett was an avid reader and her home library was an inspiration to all who knew her. Throughout the years, she edited books for some local authors and worked at several area businesses and banks. Church and town history as well as family genealogy were very important to her. Her husband retired from the United States Army, having served in Korea and Vietnam and came home to Manteo where he served as Chief of Police for 14 years. She traveled many years with him in support of his service both locally and abroad.

Relatives and friends are invited to attend a graveside funeral service on Friday, June 26, 2020 at 2:00 p.m. at the Midgett family plot area of the Manteo Cemetery. In lieu of flowers, the family requests that donations be made to the Dick and Helen Scarborough Facility Fund at the Mount Olivet United Methodist Church, PO Box 787, Manteo, NC 27954 or to the Outer Banks SPCA, PO Box 2477, Manteo, NC 27954 or a charity of their choice.