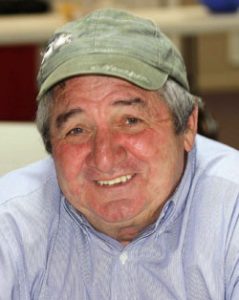 KILL DEVIL HILLS — James Lee Poulos, 70 of Kill Devil Hills, NC passed away peacefully Tuesday, March 10, 2020 at his residence. He was born in Miami, Florida August 8, 1949 to the late Gus Nick Poulos and Flora Lee Moore. He was a devoted loving husband, father, Poppop/Pappy, and a member of the community who valued his family and friends.

He was a graduate of Kellam High School, Class of 1967. After high school, he enlisted in the United States Coast Guard and served his country proudly. While stationed in Portsmouth, Virginia, he met the love of his life Ann and they would settle in Virginia Beach, Virginia and begin his family. In 1979, he moved to the Outer Banks to start his own business Carolina Southern Ice. During this time, he would help to govern and coach Little League Baseball for the Northern Beaches where he made an impact on many people’s lives. Later in his life, he worked for Dare County Schools and would once again establish his own business, today known as A & J Landscaping.

Jim was a successful businessman with a great work ethic but made his family a priority. He was a dedicated involved community member mostly known for The Outer Banks Christmas House. Just like his wife, his love of Christmas brightly shined through, it was his love for people and love of life that he was ultimately known for.

Jim is preceded in death by his loving wife Annie Lee Poulos and survived by two daughters Dianna Mueller and husband Dennis, Kill Devil Hills, NC, Kristy Poulos (Wescott), Wanchese, NC; one son Jimmy Poulos Kill Devil Hills, NC; grandchildren Caitlin Liebno, Ashtyn Wescott, Keaton Wescott and Adlyn Wescott; and great-grandson Brantley Monroe. In addition, he is survived by a brother, Nick Poulos and wife Donna of Blairsville, GA; sister Mary Ellen Hinchliffe and husband George of Jacksonville, Florida; aunt Eleanor Bennett and husband Tom of Mauldin, SC; as well as many other family and friends all of whom he loved very much.

Friends and family are welcome to visit the Poulos residence at any time. A viewing will be held from 4 p.m. until 6 p.m. on Sunday, March 15, 2020 at Twiford Colony Chapel in Manteo, NC. A celebration of life for Outer Banks friends and family will be held at 11 a.m. on Monday, March 16, 2020 at the Ark Church with Pastor David Daniels officiating.

An additional service will be held in Adel, Georgia at 11 a.m. Wednesday, March 18, 2020 at Adel First Assembly of God officiated by Pastor Eric Gordon. He will then be laid to rest at Pine Grove Cemetery in Lenox, GA. Purvis Funeral Home in Adel, GA will be assisting with Georgia arrangements.

Flowers may be sent to either location.