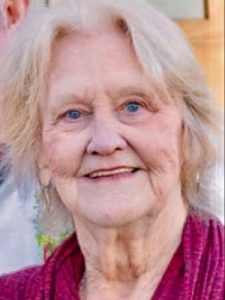 Born in St. Louis, Missouri, she was the daughter of the late William Gerard Moher and Emily Esther Arbeiter. Joanne grew up attending Catholic School and found her faith and love for the Lord at an early age.  Upon graduating High School, she joined the U.S. Navy and served her country proudly. After the Navy, Joanne returned home to help her mother and worked as an IBM Operator, before moving East and meeting the Love of her life.

A member of Fair Haven UMC and Clark’s Bethel, she was well-known and respected in the community.  Joanne always believed in helping others and was proud of her roles as Girl Scout Leader and Head of the Theta Rho’s. A girl’s club under the Internal Order of Oddfellows, of which she taught and choreographed a drill team of teenage girls from the Tri Villages and took them on to win at National Competitions.  She was also a long-standing member and past President of the International Association of Rebekah’s.

A believer in hard work, and keeping busy, Joanne continued to work two jobs well into her 60’s.  She managed several Outer Banks Restaurants throughout the ‘70s and ‘80s and won several waiter/waitress competitions that were held in Nags Head.  She spent another 20+ years working in the Vacation Rental industry on Hatteras Island as well as other Customer Service-related jobs where she met and touched so many different lives.

Joanne had a flair for life and loved spending time with her family.  She had a smile that could light up a room and a great sense of humor.  She never sugar-coated anything and told you exactly what she thought.  She was beyond kind, loving, compassionate, honest, and true. She did so much for so many and will be greatly missed.