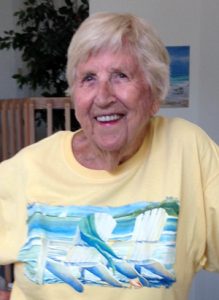 Born in Detroit, MI on March 12, 1924, she was the daughter of the late Mary Wilson Ronald and David P. Ronald.

Marge served as a beloved Girl Scout Troop 10 leader and maintained friendships with “the girls” for over 60 years.  She retired from the Berkley Public Schools in Michigan as a teacher’s aide. She became a part-time resident of the Outer Banks in 1966 and moved full time to the OBX in 2000. Marge was a member of the local writer’s club, an avid bowler where she made lifetime friends, an active member of the Outer Banks YMCA and was greatly influenced by the Salvation Army Church at an early age.

Marge displayed an infectious care-free attitude and encouraged everyone to laugh often.  She  loved to play cards with family and friends.  She knew all the lyrics to songs and if she didn’t then she made them up.  Marge was a first generation American and was very patriotic.  She enjoyed reading biographies, loved watching the ocean sipping on her favorite beverage and going to water aerobics with the Y ladies where you could find her in the back adding colorful commentary.  It filled her with joy to spend busy summers with her grand and great children.  Marge will be dearly missed but we were fortunate to have her impact our lives for so many years.  She loved to live life with laughter and would remind us “If you can’t laugh, then stay home.”

In addition to her parents, she was preceded in death by her husband, Jimmy Sovia, daughter, Becky Jean Sovia, sons-in-law, Ron Kopacz and Luey “Cruiser” Midgett; and three brothers, David, Jack, and Jim Ronald.

A private family graveside service will be held at Austin Cemetery.

In lieu of flowers, the family suggests donations in Marge’s name be made to Outer Banks Family YMCA, 3000 S. Croatan Hwy, Nags Head, NC 27959 or the Salvation Army, https://www.salvationarmyusa.org/usn/.