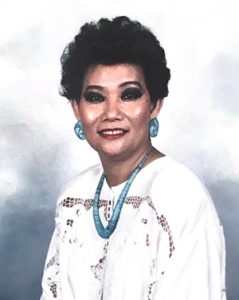 KILL DEVIL HILLS — Minerva T. Shearer, 83, passed away Saturday, August 28, 2021, at the Outer Banks Hospital, North Carolina. She survived Breast Cancer and had been battling Dementia for the past 15 years. Minerva was born on December 22, 1937, in Narvacan, Philippines.

After returning to the US in 1981, she became a Signals Intelligence Officer.  She worked in the Middle East, South America, Africa, Europe, Asia, and even Russia.  She spent many months overseas away from family in those countries.

One of her fondest memories of those times is being able to be “Mom” to the Marine guards at the US Embassy’s that she visited and helped with counter-surveillance.  They must have got a kick out of the little 90-pound “bossy” Filipino lady.

“And you shall know the truth and the truth shall make you free.”  (John 8:32) (Unofficial CIA motto)

There are no services planned at this time. Condolences may be expressed at   www.gallopfuneralservices.com. Gallop Funeral Services, Inc. was entrusted with arrangements.