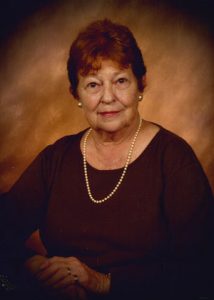 MANTEO — Patricia Basinger Fearing, age 85, died Wednesday, November 20, 2019, at her home. She was the widow of Woodson Bradford (Woodie) Fearing, II, whom she married in 1967. A sixth-generation Charlottean, she was the daughter of the late Thelma Bennett Basinger Hooton and the late Julius Caldwell Basinger and the stepdaughter of the late Charles Brady Hooton, Jr. of Danville, Illinois and Greensboro.

She is also survived by many beloved cousins and numerous “adopted” special children of the heart.

She began her professional career as a recreation specialist for the Greensboro Parks and Recreation Department and directed the Children’s Theatre of Greensboro and the Show Wagon, she founded, and directed the Danville Children’s Theatre for five years also beginning that community’s Arts Council. She was one of the founders of the Sea and Sounds (now Dare County) Arts Council.

She first came to Dare County in 1965 to serve as makeup supervisor and assistant to The Lost Colony costumer, Irene Smart Raines, a position she held for two seasons. She later played the role of Joyce Archard and served as stage manager for two seasons as well as worked in the business office in promotion and publicity. An avid supporter of the production and RIHA, she frequently reviewed the play for The Coastland Times.

She moved permanently to Roanoke Island in 1966 and taught the first special education class for the Dare County Schools.

She worked as a reporter for The Coastland Times and edited that paper’s prestigious supplement magazine Coastlander for over ten years, frequently writing feature articles for the paper up until the time of death.

In 1967, she began working for the Economic Improvement Council as Director of the Roanoke Island Child Development Center. During which time she organized and wrote the federal grant that enabled EIC to establish a full ten-county project Head Start Program in all ten of the Albemarle counties served by EIC. An avid civil rights advocate, she worked in Dare and neighboring counties. Actively participating in many of the civil rights activities locally, including the founding of the Golden Age Club. She was a member of the Freedmen’s Colony Preservation Association and served as the group’s treasurer and was co-chairman of the Little Red Engine Minority Scholarship Committee.

In 1970, she resigned from EIC to become a fourth-grade teacher at Manteo Elementary School, as well as teaching drama to sixth graders and organizing many special school-wide activities.  In the mid-‘80s, she transferred to the Dare County Schools Central Office to serve as the unit’s first Public Information Officer and Child Nutrition Director. She held the latter position until her retirement in 1995.

Involved in many phases of her family’s businesses, she was a licensed real estate broker.

A devoted longtime member of St. Andrew’s by-the-Sea Episcopal Church, she was a Lay Eucharistic Minister and Lector, on many committees and an active member of the Altar Guild.

Her funeral will be held at 2:00 pm on Thursday, December 5, 2019, at St. Andrews by-the-Sea Episcopal Church, with her cousin, the Right Revered Herman R. Yoos, III of Columbia, SC and the Reverend Tom Wilson, Rector of St. Andrew’s, officiating. The Reverend Charles E.B. Gill will give the eulogy.

The interment will follow the service and will be held in the Fearing family plot at Manteo Cemetery.

The family will receive in the parlor and narthex of St. Andrew’s Episcopal Church, Nags Head prior to the funeral from 12:00 until 2:00 pm.

Memorials may be made to St. Andrew’s Altar Guild and the Church flower fund.