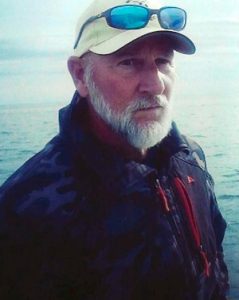 WANCHESE — Phillip Glenn Etheridge, age 61, of Wanchese, NC died Tuesday, March 3, 2020, at his home with his family by his side. He was born on August 3,1958. He was a devoted man of God, Husband, Dad, and Pop first above all else in his life.

He was a graduate of Manteo High School, class of 1976, where he was an all-around phenomenal athlete in football and baseball. Joining the varsity football team straight from Junior High, he helped lead the team into a state championship.

After graduation, he immediately enlisted into the Army where he was an MP with top security clearance. He spent most of that time in Germany.

Upon returning home from the Army, he decided to pursue a career with the Dare County Sheriff’s Office where he was made Sergeant Deputy. During that time of his life, he would meet the love of his life, Sharen, in a little diner we all know as the luncheonette. From then, they spent 31 blissful years together never being apart.

Phillip loved his family first and taking care of them was his top priority. He loved and respected his job and always had the utmost integrity.

He continued his training and became a graduate of the FBI National Academy, in which he was specifically chosen to go. Then he would be promoted to Chief Deputy, which was the position he retired from in 2011.

Phillip loved taking his family out on their boat, and going clamming with the boys was his favorite hobby. Phillip had a love for the water since he was a young elementary boy who worked on a trawler.

Anyone who knew him would say Phillip was the strongest, most loyal warrior of all.

A celebration of life for Phillip will be held Saturday, March 7, 2020 at 2:00 at the Wanchese Assembly of God church (brick church). Following the service, the family will receive friends and relatives at the Whole Ministry Center, 826 ER Daniels Rd, Wanchese, for dessert and beverages.

In lieu of flowers, donations can be made to UNC Health Head and Neck Cancer Research Fund, PO Box 1050 Chapel Hill, NC 27514 or online at www.unchealthfoundation.org in memory of Phillip Etheridge.