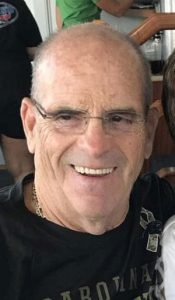 Robert “Bob” Burton Keys, Jr. entered his heavenly home on Wednesday, December 14, 2022, at the age of 77.  He passed peacefully in his sleep after a short battle with pulmonary fibrosis.  Through their faith, the family finds peace and comfort that Bob is no longer suffering but is now healed and in the presence of his Lord and Savior.  He is survived by his wife of 54 years, Janice Andrea Keys; children, Kelly, Bonnie (Brian), and Jennifer (Richard); grandchildren, Megan, Andrea, BJ, Taylor, Simon, and Cameron; sisters, Evelyn (George) and Susan (Eddie); nieces, nephews, and lifelong friends.  He was preceded in death by his father, Robert Burton Keys, Sr., and mother, Anna Margaret (Osborne) Keys.

Bob was born to Robert Burton Keys, Sr., and Anna Margaret (Osborne) Keys in Philadelphia, Pennsylvania.  He graduated from Abraham Lincoln High School in Philadelphia, Pennsylvania, in 1964.  He served in the Army–82nd Airborne Division from March 1965 – March 1968.  He took great pride in serving his country and was a proud United States Veteran.

Bob and Janice met at Abraham Lincoln High School, where they graduated in 1964.  They lost contact after graduation and reconnected at an event in May 1968.  After a whirlwind courtship, they were married in June 1968.  In Bob’s early career, he worked as a machinist and later for an oil company where he installed and maintained fuel oil burners for home heating.   Bob, Janice, and their daughters began vacationing in Hatteras in 1977, where they enjoyed camping and fishing.  (During Bob’s time in the Army, he was stationed in Fort Bragg, NC.  His love of the area is what took him back to North Carolina.)  In 1983, Bob relocated his family to Hatteras Island.  Upon moving, Bob started working for a local plumber.  In 1985 he obtained his North Carolina Plumbing Contracting License and started his own business.  He went on to do commercial and residential plumbing, new construction, and repairs and maintenance, serving the Outer Banks Community from Corolla to Ocracoke for nearly 40 years.

Bob and Janice were members of the Cape Hatteras Baptist Church, where they attended and enjoyed fellowship with their church family.  Bob enjoyed hunting, fishing, and Carolina Panthers football.