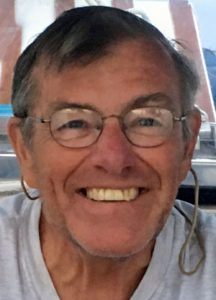 KILL DEVIL HILLS — Robert Byron Carter III, 72, of Kill Devil Hills died suddenly on October 16, 2021.  He was born in Norfolk, VA on July 21, 1949. He was predeceased by his parents Robert Byron Carter Jr. and Iris Foshay Carter Williams and the love of his life and mother of his children, Harriet Bustle Carter. He is survived by his four children and their families from the Wilmington, NC, area: Robert Byron Carter IV (Jennifer), Allen Nathan Carter (Corey), Dustin Scott Carter (fiancé Meagan), Ginger Carter Blake (Hal), and seven grandchildren; Rylee, Harrison, Bella, Bentley, Brayden, Ivy, and Harper who lovingly called him Paw-Paw. He is also survived by two sisters: Linda Carter Royal of Greensboro, NC, and Marianne Williams Winesett, and a brother, William Scott Carter both of Virginia Beach, VA, as well as his partner and loving companion Judy Watson of Southern Shores.

Bob (aka “Nut”) moved to Wanchese with his family and graduated from Manteo High School. After graduation, he joined the United States Coast Guard and served from 1968 to 1972.  While serving on Iwo Jima he restored the LORAN station allowing his fellow servicemen to communicate with home. He later served at Oregon Inlet. After Bob and Harriet were married, they owned the Treasure Chest (a t-shirt and souvenir shop), and Bob was a firefighter for Kill Devil Hills.  When Dare Co. formed an EMS system, Bob was on the first crew. He served the citizens of Dare for 28 years with skill and compassion. After retiring from EMS, he was employed by West Marine where he was known as “Barnacle Bob” and shared his extensive knowledge and love of boating with anyone he came in contact with.

Bob loved life and lived it to its fullest. His most favorite times were sharing time with his family, brewing beer, and sailing.  He was a fixture in the local sailing community and those communities he and Judy found on their many adventures to the Bahamas on THE EDGE.

Family and friends will be gathering for a Celebration of Life on November 6, 2021, from 11:00 am-1:00 pm at the Outer Banks Brewing Station, 600 S Croatan Hwy, Kill Devil Hills, NC 27948.  We look forward to sharing memories and raising a glass to a life well-lived.

To plant a tree in memory of Bob or send flowers to the family, please visit www.TwifordFH.com/send-flowers.