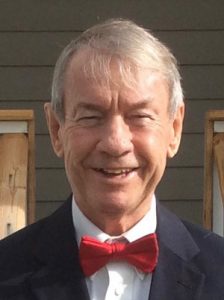 He liked watching a good hockey game and was a fan of the NHL’s Lightning, Capitals and Hurricanes. He was particularly excited to see the Lightning win their second Stanley Cup earlier this fall. He was also a fan of baseball, coaching his son Jay’s little league team in Culpeper in the early 80’s. As for Major League Baseball, he was frustrated with the increasing length of the games.

A memorial service will be held at 11:00 AM on Saturday, December 5th, at St. Andrew’s By-the-Sea Episcopal Church with The Rev. Nathan M. Finnin officiating.

On behalf of Bob, the family wishes to say thank you to the nurses and staff at Outer Banks Hospital/AMU and Chicago Blackhawks fan Dr. Guenther.

NAGS HEAD — Edward W. Wise, Jr., known to all as Wykie, a native of Nags Head, NC, went to heaven the morning of Friday, November 11, 2022, while at home with his beloved wife Ginger by his side. He was the son of “Nettie” and Viola Wise, raised by his Aunt Agnes Barnett.  He leaves [...] Obituaries |  Full Article

HATTERAS — Sara Lee Styron, “Secky,” 74, passed on November 7, 2022, at her home in Hatteras, NC. She was born in Norfolk, Virginia on April 19, 1948. Sara is predeceased by her parents, Otis and Mary Styron, and her sister Catherine Styron Bulman. She leaves behind her sister Judy Styron of Colorado as well [...] Obituaries |  Full Article

October 1, 1949 – November 10, 2022 BUXTON — Susan West of Buxton, NC passed away Thursday, November 10, 2022, after a brief illness. Susan was born in Baltimore, Maryland on October 1, 1949. She was a graduate of Towson State University. She worked for the Maryland Historical Society before moving to Hatteras Island in [...] Obituaries |  Full Article